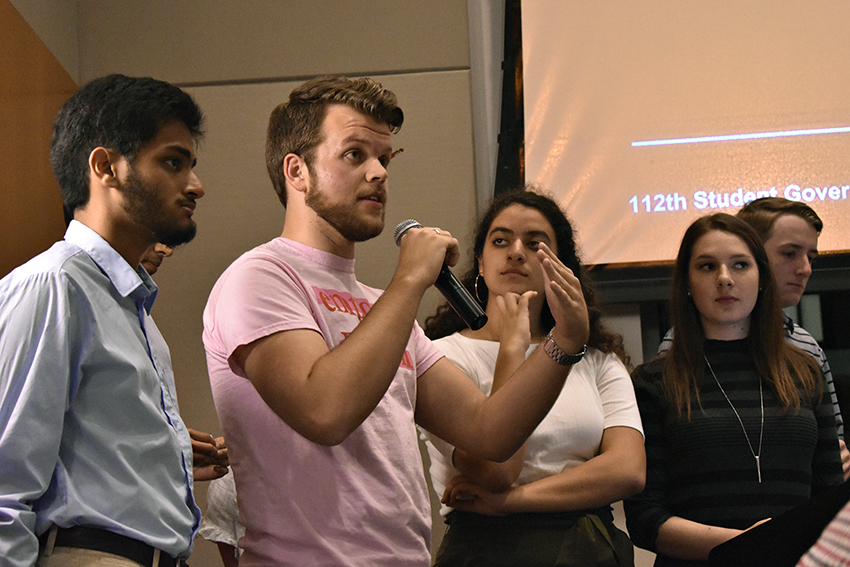 In a committee meeting Tuesday night, SG members changed one of the components of  A.R. 4. If it is approved, SG will compile a list of registered student organizations that have completed Not On My Campus and consent education training,  rather than those either accused of or found guilty of sexual violence, to be sent to all students at the start of each school year.

"It's a formal recognition that the university and our peers support survivors and we're going to honor that promise to do everything we can to promote their emotional wellbeing," Fanucci said.

Isabella Fanucci, Interpersonal Violence Prevention Policy director, said more than 40 students requested Student Emergency Services support last Tuesday after the Young Conservatives of Texas hosted a rally in support of Brett Kavanaugh, who was accused of sexual assault. He was confirmed to the U.S. Supreme Court in a 50-48 vote by the Senate on Saturday.

“Any sexual assault survivor that didn’t know what they were walking into … can’t walk past that and not think about the person that held up a sign that said, ‘Me Too Gone Too Far,’” said Fanucci, a speech language pathology and psychology junior. “So many people told me they felt invalidated and triggered from this.”

If A.R. 4 is approved, SG will compile a list of registered student organizations containing members either accused of or found guilty of sexual violence, to be sent to all students at the start of each school year.

“Whether they have been accused of sexual violence or they have demonstrated a lack of empathy for this cause … people would be aware of this group,” Fanucci said. “If they saw an event that was going on by them, they could avoid that area, or people joining the club can know.”

The resolution also requests more funding for SG entities geared toward sexual violence prevention, such as Interpersonal Violence Prevention and Student Safety, and to fully fund SURE Walk.

Another resolution, A.R. 3, was proposed tonight and suggested a University-wide ban of state Sen. Charles Schwertner, a Georgetown Republican who was accused of sending sexually explicit messages to a UT graduate student.

Jacob Springer, state relations agency co-director and resolution co-author, said banning Schwertner before the investigation finishes does not imply guilt. A ban would align with Title IX’s No Contact Directive, which is commonly issued to prevent interaction between the two parties during an investigation. The ban would last until Schwertner is found innocent or a punishment is given.

“It’s important for safety and security of students there is no contact,” said Anagha Kikkeri, University-wide representative and government sophomore. “It’s following protocol that would be applied to other situations if this was people within the University.”

“When the student body is the responsibility of the University … it should not be a difficult decision to ban somebody who would only harm that environment and also has no necessity of being on campus,” Springer said.