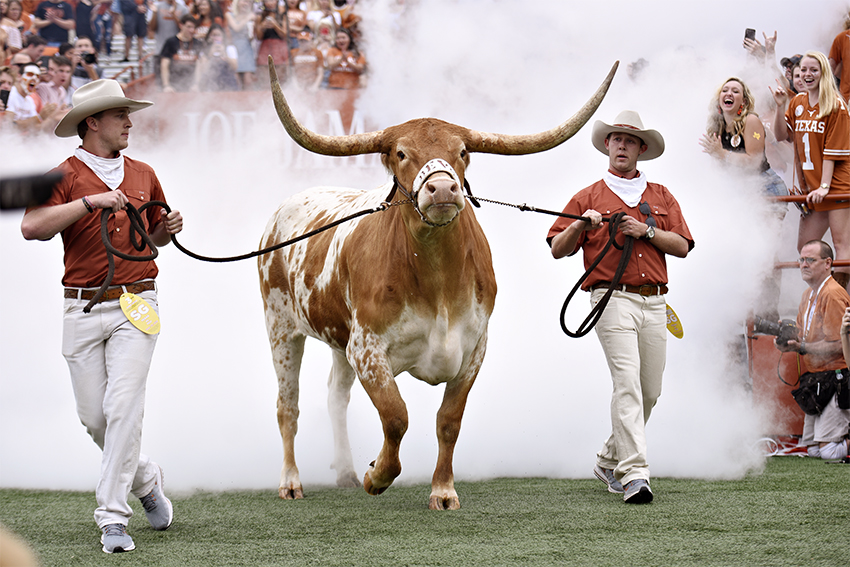 As the football team continues to increase their number of big wins this season, Bevo XV’s horns have been gaining big inches as well.

Bevo XV’s horns have grown more than one foot wider in the past two years. In 2016, his horn span from tip to tip was 42 inches. Now, his horn span is 58 inches.

Ricky Brennes is the executive director of the Silver Spurs’ Alumni Association, which is responsible for handling and caring for Bevo XV, who is currently three years old. He said Bevo’s horns will grow an inch longer every month, until he turns six years old, when the growth rate will slow down.

“His horns will continue to grow for the rest of his life,” Brennes said. “The average lifespan of a Longhorn is around mid-20s, so we’ll have to wait and see how much they grow.”

Brennes said the last mascot, Bevo XIV, had the longest horn span historically out of all of the Bevos, measuring approximately 82 inches. He said it is too early to know if Bevo XV’s horns will reach that length because each Longhorn is unique, and each set of horns bends and grows differently.

“It’s like looking at a toddler and asking how tall they’ll be in the future,” Brennes said. “You don’t really know, and there’s no real way of telling. It’s hard to say, and it’s just one of those things you have to wait for it to play out.”

Brennes said they let Bevo’s horns grow and do nothing to maintain them, but they make sure Bevo does not damage them.

“He could bang a horn on something but it’s pretty hard to damage them,” Brennes said. “The horns are pretty sturdy, so whatever it would be it would have to be pretty significant. We certainly pay attention to anything he could do where he might injure them.”

Andrew Miller, a current Texas Silver Spur, said many people expect Bevo to be aggressive like a bull, but the 1,700 pound steer is docile and happy due to his pampered lifestyle. He rides in an air-conditioned trailer and has a choice between hay, grass, filtered water, sweet cubes and feed.

“I’ve never seen him aggressively use his horns,” said Miller, a business honors and finance senior. “We stay outside of the radius of his horns because he’ll scratch his side with his horn if he has a bug or fly on him. He’s been trained since birth on how to interact with humans and it’s really paid off.”

Miller said Bevo enjoys rubbing his horns on cedar trees in the pastures on the privately owned ranch where he lives, and sometimes the Silver Spurs will scratch his horns because it reminds Bevo of the cedar trees.

Radio-television-film sophomore Justin Morris said he was standing outside Bevo’s fence, which was around three feet away from Bevo, at the USC football game. He said Bevo’s horns were beautiful and he believes horn size matters to UT students.

“His horns are mighty and bigger in real life than in the pictures,” Morris said. “If his horns stayed the size they were back in 2016, we would be the Texas medium-horns. We are the Longhorns, so the longer the horns the better.”