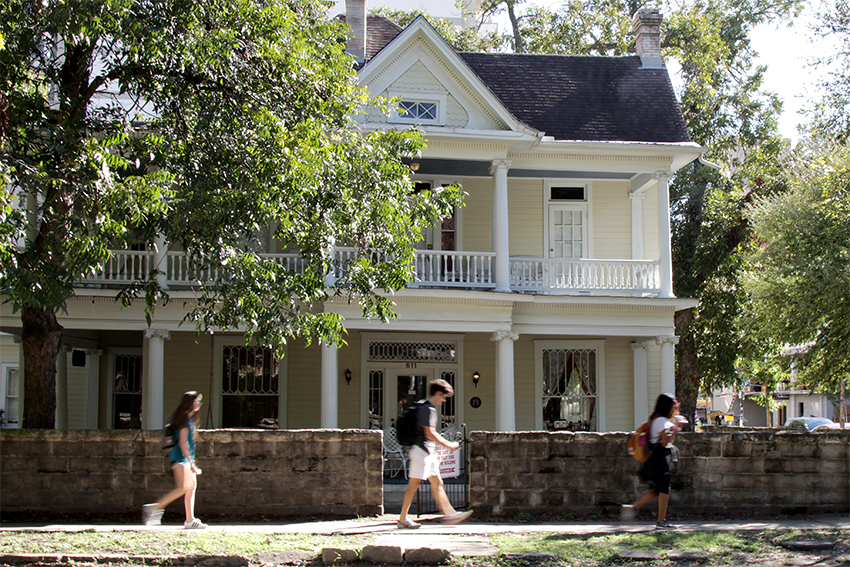 A new 17-story high-rise will begin construction in West Campus next summer and will surround the historic Kenney House that currently sits on the property.

The Kenney House, which currently houses a bed and breakfast called The Star of Texas Inn, sits on the corner of West 22nd and Rio Grande street. The house was established as a historic landmark in 1983 by Mike McHone, who attended UT in the late 1960s and is the project consultant for the new high-rise.

As a UT physics student, McHone lived in the Kenney House when it was used for student housing. McHone said he decided to establish the house as a historic landmark to save it from being torn down by construction in West Campus.

“Student condominiums were the big deal and they were knocking down buildings right and left to build them,” McHone said. “I was trying to save the neighborhood as some of the more historic buildings went down.”

McHone said the high-rise, which will be called Villas in Rio, will have glass walls on its bottom levels to show off the historic building. The Kenney House will be bordered on two sides by the high-rise and will be converted to a coffee shop and may also host office spaces. McHone said restoring the Kenney House will benefit its historic importance.

“We’re incorporating it and showing it off and hopefully having more people know a little bit more about the Kenney House and see it as a historic landmark and recognize it for its contribution … to the city of Austin,” McHone said.

Biology junior Shivani Patel, who lives in the Quarters’ Nueces House apartments in West Campus, said adding student housing and a coffee shop would be beneficial for students living nearby.

“Coffee is always good, everyone loves coffee,” Patel said. “It would be convenient (for students).”

Chris Mackey, owner of The Star of Texas Inn, said for reasons unrelated to the new project, the inn will close in May 2019, which is when construction for the high-rise will begin. Mackey said the new project will increase housing options for UT students who want to live close to the University.

“I thoroughly support (student housing expansion), even though it’s changing my neighborhood, because … I think it’s a little crazy that for all these years, students have had to commute from all parts of town to go to school,” Mackey said.