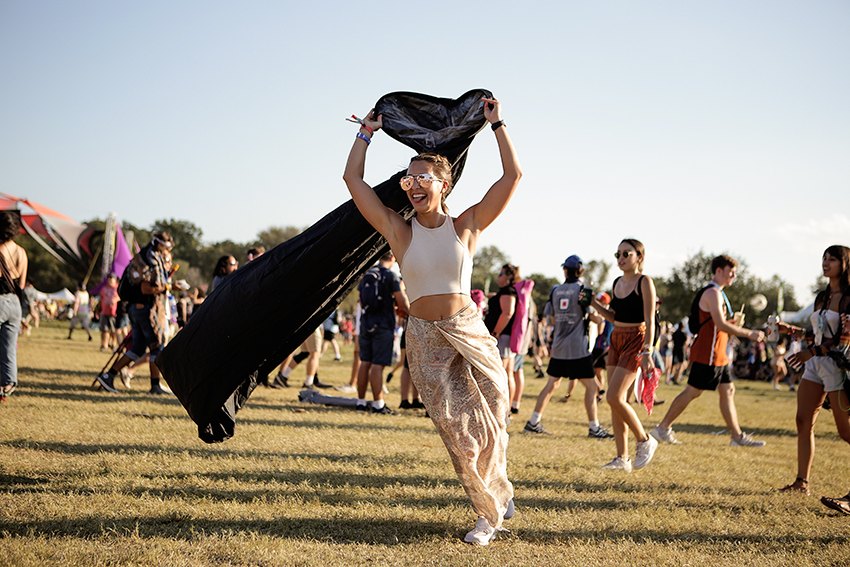 The usual hustle and bustle of the state capital was greater than usual today, as people from around the world flocked to Zilker Park for this year’s second weekend of Austin City Limits (ACL).

As compared to previous years, the brutal, Texas heat stayed at bay during the festival. Day one’s temperatures, which peaked in the mid-80s, added another pleasant element to attendees’ overall ACL experience. Because of the day’s favorable weather conditions, more festival makeup looks stayed in place, and attendees kept their sunscreen tucked away. The forecast even gave festival-goers the courage to step out from the venue’s shadows, instead choosing to set up camp on the Great Lawn.

Although headlining artists were slated to perform later in the day, the morning and early afternoon still brought on powerful artists whose setlists rocked the crowds to their core. For example, R&B artist Ravyn Lenae filled the Tito’s Handmade Vodka Stage with emotional ad-libs that gave the audience chills.

Moments later, Chicago-born rapper Noname displayed her quick rapping style and clever wordplay at the HomeAway stage. As she performed groovy tunes such as “Self” and “Montego Bae,” the crowd couldn’t help but rock to the beat.

Festival-goers began moving towards the Miller Lite side of the park to see English star Lily Allen. The big name artist’s pink outfit, shy gestures and performance of her 2006 hit “Smile” had many in the crowd grinning from ear-to-ear.

Cloudy weather in the late afternoon reflected attendees’ growing fatigue, but Khalid’s lively performance woke everyone from their slumber. Despite performing before a massive crowd, the singer’s poppy dance moves and contagious giddiness succeeded in keeping the whole audience engaged.

While the heavy bass of BROCKHAMPTON’s “NEW ORLEANS” echoed throughout the park, Grammy-nominated Irish artist Hozier took the HomeAway center stage. His hit “Take Me to Church” provided the crowd with a taste of gospel amid the other showcases of the day, as members of the crowd raised their hands to the heavens.

As the sun set on Zilker Park, people of all ages and music tastes migrated to the American Express venue to witness headliner Paul McCartney take center stage. Even at age 76, the former Beatles’ captivating performances of hits such as “Band on the Run” and “My Valentine” proved that he still possesses the zest and skills that first brought him widespread fame. The legend brought Day One to a close with “Hey Jude” — the old classic’s catchy lyrics filled the whole park.