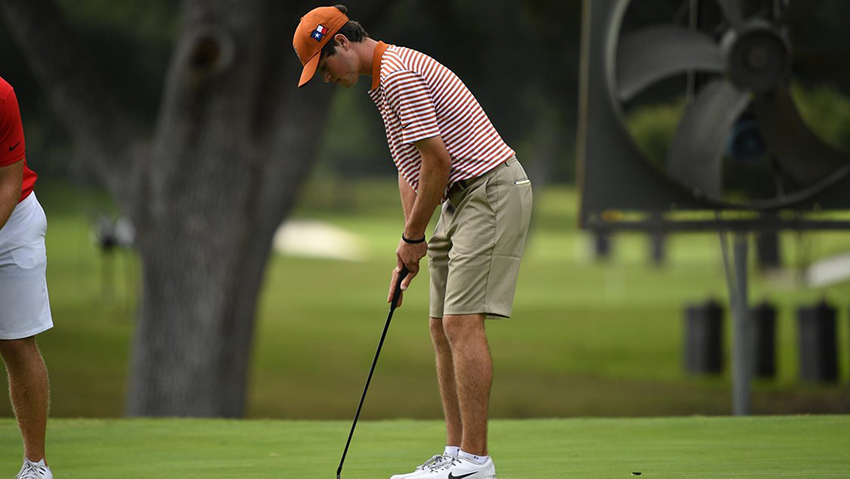 Texas beat No. 1 Oklahoma State and No. 2 Oklahoma during the final round of the inaugural Big 12 Match Play Championship on Sunday en route to a third-place finish on the weekend.

Cole Hammer, one of the three Longhorn freshman competing, went undefeated in his matches, taking down opponents from Baylor, Iowa State, Oklahoma and Oklahoma State.

Despite the young careers of the three competing Longhorns, head coach John Fields has a lot of confidence in what each of them brings to the table.

“We have an infusion of freshmen that are very accomplished,” Fields said prior to the start of the tournament last week. “All three of them have tremendous experience on a national and even an international basis and as a result, they’re going to play a lot of golf. So, I’m excited about those guys because they bring talent, they bring enthusiasm, and they bring believability with them.”

Of the three, Hammer had the strongest week of play. In addition to the undefeated performance during the Championship, Hammer thrived earlier in the week at the Nike Invitational, where he was tied for the lead going in to the last round.

“Cole Hammer proved that he could get into contention,” Fields said. “I know that he was left stinging after the Nike Invitational because he had an eight-hole stretch on the final day that knocked out his chances of winning the golf tournament. But on the other hand, during the last round, he was leading the tournament. If he can create opportunities like that, then at some point in time he is going to be close, and I think he got valuable experience because of that.”

In a normal match play tournament, one or two rounds of stroke play are played on the first day to determine which teams move on to the match play portion of the event, but due to the field size this week, all rounds were match play. The specific format for this week was a pool play-style tournament in which each team played four matches.

The teams that made it to the championship match earned their spots by accruing points by winning or drawing matches. Teams earned three points for a win, one point for a draw, and zero points for a loss. Although Texas did not make it to the championship match, they defeated Oklahoma State on the final day of tournament play to capture third place.

Next week, Texas is playing in its final tournament of the fall season at the Tavistock Collegiate at Isleworth Golf & Country Club in Florida.