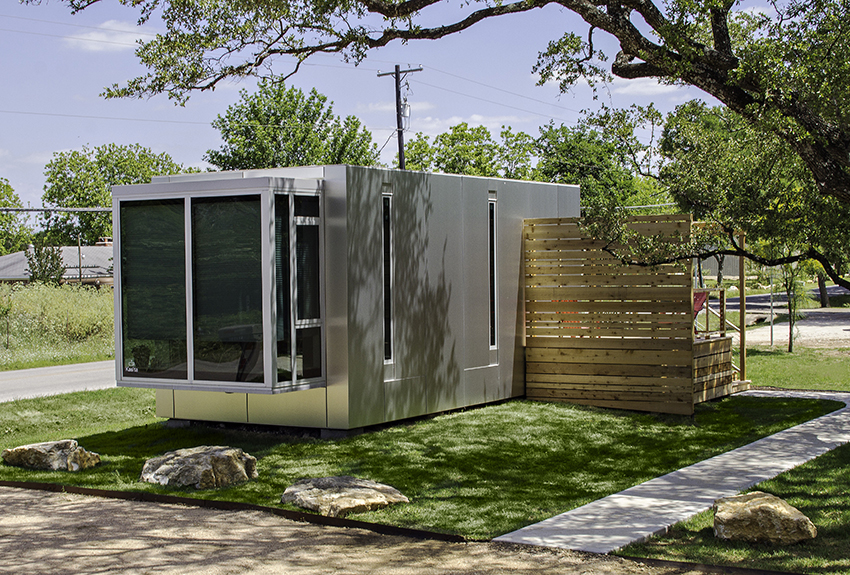 No one would have thought living in a dumpster for a year would spark a housing business — no one but Jeff Wilson.

Wilson founded Kasita — a micro-home business based in Austin that manufactures small, intelligent homes called Kasitas for unlikely spaces in the urban community. Now, Kasita continues to improve the homes and extend its outreach.

Wilson, co-founder of Kasita, recognized the potential for smaller homes after living in a 33-square-foot dumpster for a year. While teaching at Huston-Tillotson University, Wilson sold his possessions and moved into a campus dumpster in early February 2014.

“It was a grand experiment in testing the question of, ‘How much do you really need to be happy?’” Wilson said. “I wanted to take something that was both very small and also a symbol of waste, which happened to be a dumpster.”

The business launched in April 2015, three months following Wilson’s departure from his dumpster. Today, Kasita has 27 employees divided among the technology and production teams. According to Kasita’s website, the building process for a single home takes at least seven weeks, with prices starting at $150,000.

Wilson said Kasitas are unique because they are built as an immersive experience rather than a home.

“Kasita’s the only micro-home out there and one of the only homes in the world where it has technology integrated in it from the very beginning,” Wilson said. “You walk in the door, and everything just works.”

While this wave of micro-living spans across the country, some disagree with its functionality, such as architectural engineering professor Atila Novoselac. He said when factoring in air quality, smaller spaces are problematic because energy emissions from appliances have a larger impact in smaller houses than larger houses.

“You’re solving some problems about living space but also turning a new set of problems, which are solvable,” Novoselac said. “But it generates a completely new perspective of how you should design those houses.”

Though Novoselac opposes the micro-home movement, he said tiny houses are necessary for limited spaces like crammed cities. Luckily, Wilson said Kasitas are specifically built for slivers of land.

“I really wanted to find a place in the cracks to put housing,” Wilson said. “Kasita’s really great because we can put it on very small pieces of land where most people aren’t looking to put things.”

Even students find micro-homes desirable and recognize their potential, including Terrell Brown, an architecture and architectural engineering junior.

“Just thinking of the possibilities of what (micro-homes) could be used for, it was really eye-opening for me,” Brown said. “I feel like it could potentially be the future of architectural style.”

This idea of micro-homes does not stop there — Kasita now has 10 houses nationally and aims to build 80 more within the next year. The business hopes to extend its outreach beyond California, Nevada and Texas, and eventually expand internationally.

“It’s not just about building a small home,” Wilson said. “We’re building out a larger network to where one day — say five years from now — when you leave UT, you can be living in a Kasita right off the UT campus.”