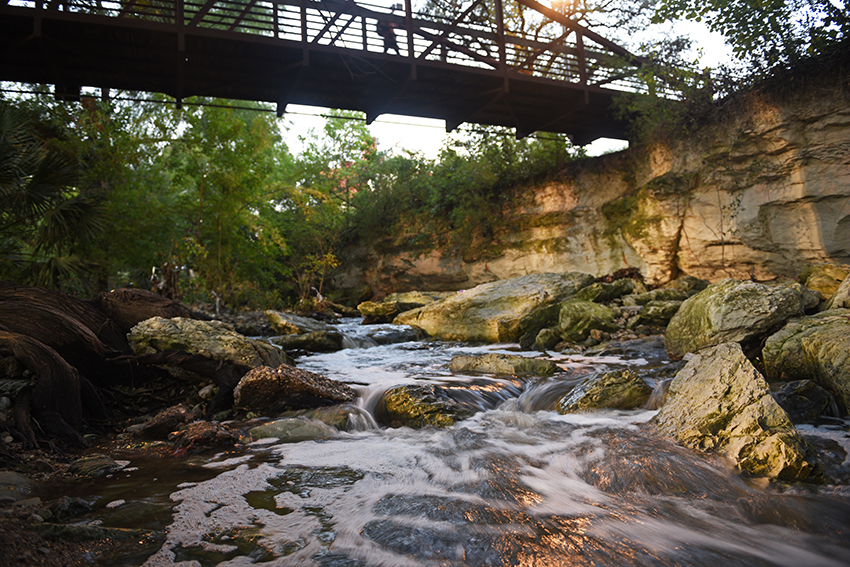 Waller Creek is not safe due to high levels of bacteria from feces, but researchers are tracking bacteria and sewage leaks to improve water quality for both the river aquatic ecosystem and the Austin community.

Mary Poteet, assistant professor of practice in the Jackson School of Geosciences, said the main cause of the pollution is outdated sewer lines leaking bacteria into the creek. Fecal bacteria does not live for long after exiting its host, and the consistently high levels of E. coli indicate a constant supply of fecal matter, most likely from leaks, Poteet said.

Reichler, Poteet, and associate professor of practice Ruth Shear are leading a new Freshman Research Initiative research stream to track fecal matter by analyzing the amount and source of E. coli in Waller Creek. In addition, Poteet is implementing conductivity studies to track high levels of salts, which is associated with sewage.

Pipe collapses are easy to identify because of the large influx of bacteria, but leaks are more of a challenge to find since they have a smaller footprint, Poteet said. Spikes of conductivity were found near Eastwoods Park and Hancock Golf Course, which implies a possible sewage leak in those areas, according to Poteet.

So far, Riedel and Reichler found that the majority of fecal bacteria is coming from humans rather than dogs.

Samples taken by the City of Austin Watershed Protection Department show over seven times the safe amount of fecal matter in Waller Creek. While this is an improvement from the past couple years, it is still very unsafe, environment scientist Todd Jackson said.

Nutrients from sewage allow bacteria to grow rapidly, which requires lots of oxygen, Jackson said. The sudden growth of bacteria lowers available oxygen and kills fish and other aquatic life, disrupting the ecosystem.

“These effects can last for a considerable amount of time after a spill has stopped occurring,” Jackson said.

He added that raw sewage can potentially have other pollutants, such as bleach, cleaning solutions, chemicals or anything that you’ve ever poured down a drain.

Jackson said the city’s urban landscape is also a major cause for continued pollution. A healthy watershed allows rainwater to seep into the ground and get filtered before reaching the creek, but urban watersheds with impervious covers, such as concrete, allow contaminated rainwater to hit the creek directly, Jackson said.

UT Environmental Health and Safety, the Waller Creek Conservancy and the City of Austin are proactively working to restore the creek, Poteet said.

UT supports the City of Austin’s efforts to curb bacteria increases and has a permit to address water quality, said Jim Walker, director of sustainability at UT. Walker added that UT isn’t contributing to the sewage leaks.

“While recent water quality sampling by UT and the City shows the introduction of bacteria to the creek is not occurring on campus, we are collaborating with the City to better understand the sources of bacteria,” Walker said.

Poteet said investing in structures that capture and filter rainwater, such as rain gardens and retention ponds, is also important in cleaning up the creek and preventing runoff. A retention pond is an artificial body of water that naturally filters water, according to Austin’s Watershed Protection Department.

“Dell Medical School is a good example of incorporating retention ponds into the landscape,” Poteet said. “If we can get the administrators and builders to recognize the importance of rain gardens, it could make a difference.”