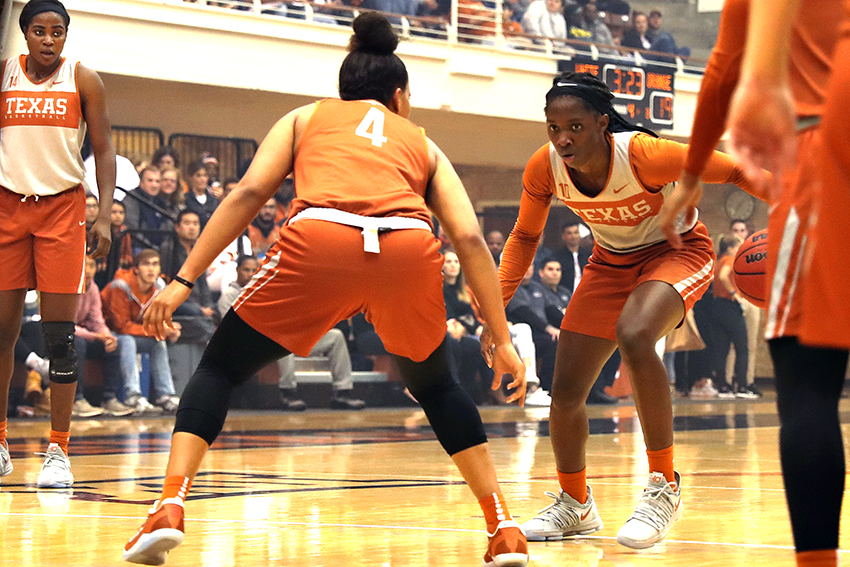 Fans packed into Gregory Gym on Wednesday night for the 2018 Texas Tip-Off. It was a chance for them to get their first look at both men’s and women’s teams and set their expectations for the season.

Head coach Karen Aston let the fans at Gregory Gym see that she had expectations for them as well.

“You have a top 10 team,” Aston said as she addressed the fans in attendance. “What gets us to the next level, in terms of the Erwin Center being a rough place to play … is the student body.”

Aston is hoping that her challenge is able to help the trend of growing attendance at their games. Last year, nearly 1,000 more people attended the games than in the 2016-17 season.

The Longhorns enter the season ranked No. 10 in the USA Today Coaches Poll. With Texas being a team that is perennially one of the top  in the nation, the program wants its attendance to reflect its national ranking.

When it came to the game at hand, the women tried to show the fans in attendance what this season has in store. The 10-minute scrimmage looked very much like an NBA All-Star game — very little defense and free-flowing basketball. The style of play made it hard to get a clear beat on the individual players but gave an indication of what the team as a whole will look like.

The scrimmage wasn’t the main event, however. Immediately after, a three-point shooting contest involving players from the men’s and women’s programs took place.

The first round of the contest pitted senior Lashaan Higgs and graduate student Danni Williams against each other. Williams caught fire at the end, winning 12-9, and advanced to the final round against men’s sophomore guard Matt Coleman.

Williams once again fell behind early but eventually found her rhythm and came back just as she had done in the previous round. At one point in the round, she cleared an entire rack without a miss. Her hot hand led to a tie with Coleman, but the win would go to the men’s team as Coleman sank a sudden-death three to win the competition.

After all the contests and scrimmages were finished, two things were evident — the ball will often be in the hands of Sug Sutton in close-game situations and Higgs will be a go-to scorer for the team.

“I think she is the most improved,” Aston said of Higgs.

The senior leadership of Higgs and the emergence of Sutton will be the first steps for the Longhorns to get to where they want to be.