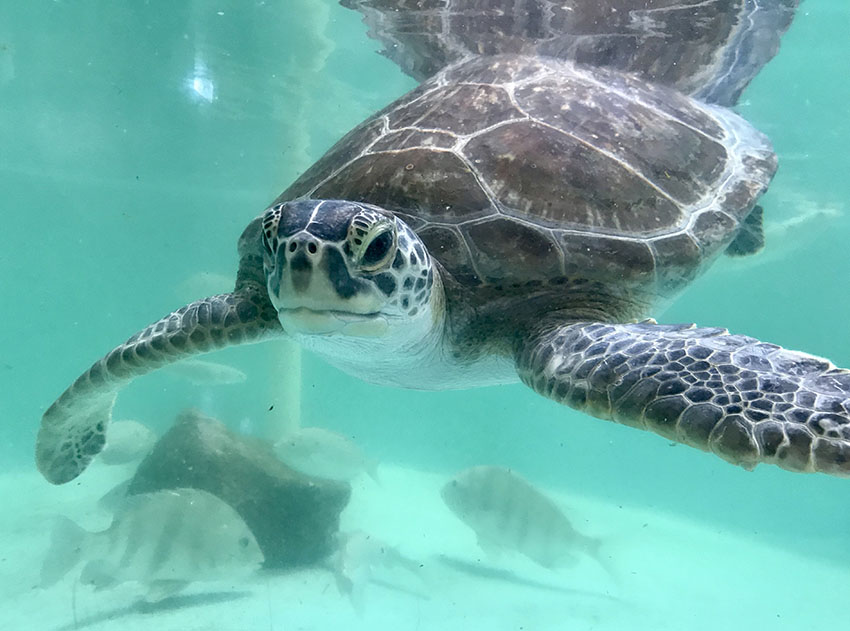 Sally Palmer, communications coordinator for the institute, said UT had a natural connection to the project.

“We’ve been working with SeaWorld for the last couple of years,” Palmer said. “When they decided to create this new exhibit, which is primarily a sea turtle attraction, they saw that it was a natural fit to work with us.”

The attraction will likely be home to green sea turtles, said Chris Havel, a senior aquarist at SeaWorld San Antonio. He added that SeaWorld is currently working with U.S. Fish and Wildlife to determine the specifics regarding where the turtles will be arriving from.

The exhibit will be an outdoor attraction with a 126,000 gallon pool, featuring different fish species to create a more natural environment for the turtles. The turtles will also have access to both shaded and sunny areas to relax in, Havel said.

An important feature of the exhibit, Havel said, is the self-sustaining artificial wetland that acts as a natural filtration system. Havel added it’s the first of its kind in aquariums.

“What’s really exciting for us is we’ve actually created an artificial wetland on three sides of the pool to take place of all the mechanical filtration,” Havel said. “We’ll be providing enrichment to the turtles as well, since sea turtles in the wild like to dive and forage, so we’ll have different devices to make them act out natural behaviors and keep them challenged.”

The artificial wetland will replace mechanical pumps by mimicking wild wetlands through naturally filtering out debris, pollutants and nitrogen produced by the animals.

“We’re taking that concept from the wild, and putting it into practice at our pools,” Havel said. “It’s going to be much more environmentally friendly and energy-efficient.”

According to SEE Turtles, six out of the seven sea turtle species worldwide are classified as endangered or threatened as a result of human actions and lifestyles. Havel said nonreleasable sea turtles are the only turtles allowed in the aquarium. These are turtles unable to survive in the wild on their own, according to Texas Parks and Wildlife.

Havel said the attraction will also feature an educational program that will encourage visitors to be more conscious of the environmental impacts of their actions, such as littering or using straws, which can pollute the ocean.

Both Palmer and Havel said that through the attraction, they hope to bolster public visibility and interest in the conservation efforts of both UT Marine Science Instititue and SeaWorld.

“We hope to share these majestic sea turtles with the public, and we want them to connect with the animals themselves,” Havel said. “We want to drive home the fact that these animals are worth saving. They’ve been around longer than we have, and we don’t want to be the ones responsible for their disappearance.”