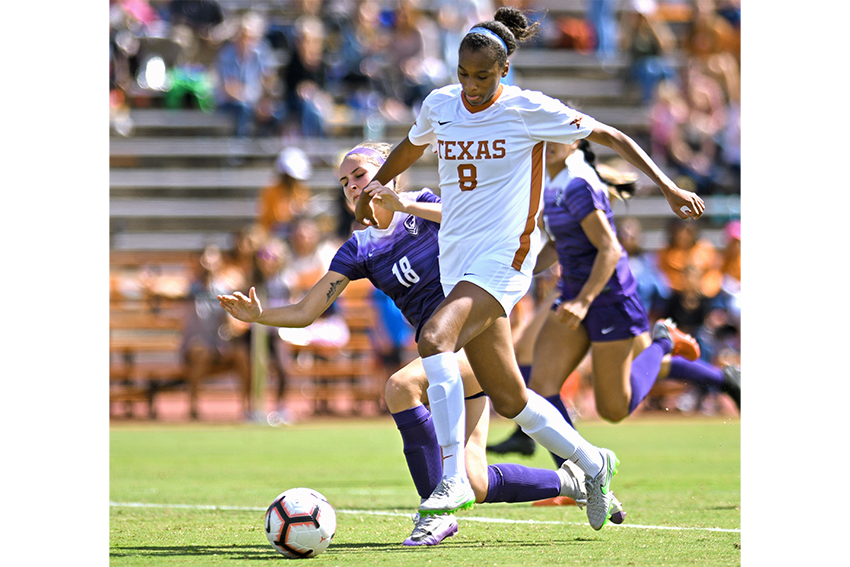 No. 17 Texas finished its regular season undefeated at home with a 4-0 win over Kansas State on Sunday.

The final home win Sunday was also the Longhorns’ Senior Day, where seven players were honored for their contributions to the program in a post-game ceremony.

“(The senior class is) phenomenal, they’re wonderful players, but they’re even better people,” head coach Angela Kelly said after the game. “They’ve brought the program to where we are today.”

The Longhorn women’s soccer team (13–2–2) struggled to finish throughout the first half, though they had countless opportunities. But they were determined to make their final regular season home game a memorable one. At the last whistle, the game resembled a slaughtering by Texas.

All seven seniors started the game, including forward Nakia Graham, who has been out all season due to an injury. Graham was only on the pitch for 19 minutes but she still expressed appreciation of the team’s performance.

“Everything we have worked for since preseason, it was all worth it when you look back at it from this moment,” Graham said. “I’m really proud of this team because we’ve battled through a lot of things this season, and I feel like we are stronger than ever going into postseason.”

Senior forward Alexa Adams was a force throughout the game. After being out half of her sophomore and junior years with a knee injury, Adams came back determined. This season, Adams had six goals, six assists, and was named the Big 12’s Offensive Player of the Week.

Her perseverance throughout her tenure at Texas was a theme commonly seen in the Kansas State game. After a long battle for possession, Adams was able to give the Longhorns the lead with a goal in the 35th minute.

Adams’ goal was a pivotal moment for the Longhorns and caused a momentum shift in Texas’ favor. By the end of the game, Texas outshot Kansas State, 15 to seven, and had 13 corner kicks while Kansas State only had one.

Though it was a game to honor the seniors, freshman midfielder Julia Grosso largely defined the Texas offense, scoring her first career goal with the Longhorns and then adding a second later in the action.

Grosso’s first goal was an unassisted finish from the 17-yard line at the 67th minute. Her second came after she single-handedly dribbled past midfield to finish outside the box. Within seven minutes, the Longhorns went from being up by one goal to leading by three.

Sophomore forward Haley Berg also tacked on the scoring barrage with an impressive goal at the 83rd minute from 19 yards out.

Though the Longhorns will lose seven seniors, Kelly said she knows the future of Longhorn soccer is safe.

“The chemistry is fantastic, they all really respect one another and care about each other,” Kelly said. “Any time you get that kind of bond, it’s going to be a powerful thing. The program is in a good place.”