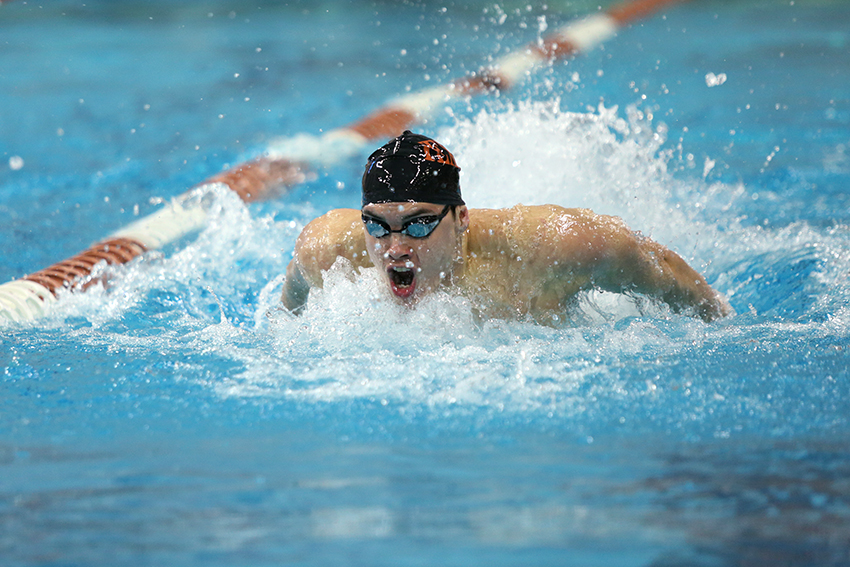 The top-ranked Texas men’s swimming and diving team fell in both of its dual-meet competitions against No. 3 Indiana University and No. 8 Florida on Saturday.

The Gators were coming off of wins against Florida Atlantic and LSU to open up their year, while the Hoosiers picked up a home win against Kentucky and had taken down two ranked opponents before the meet in No. 23 Notre Dame and No. 22 Missouri.

The three teams met up last year in Gainesville, Florida, where the Longhorns lost to Florida 258-171 and to the Hoosiers 264-165. This year, the series was brought to the Lee and Joe Jamail Texas Swimming Center in Austin.

The Longhorns picked up wins in the 200 individual medley. Senior John Shebat finished with a time of 1:45.63, good enough for an NCAA B cut. Freshman Andrew Koustik out of Costa Mesa, California, also recorded an NCAA B cut time with a 1:46.54 time in the 200 butterfly.

Redshirt junior Ryan Harty won the 200 backstroke with a time of 1:44.08. This was good enough for an NCAA B cut, which teammate Austin Katz also recorded during this time. Harty set the second-best time this year. Katz finished second, as he and Harty ended in the top two spots.

The meet was the first of many big swim meets that will be brought to Austin this season. The schedule down the line includes the Texas Diving Invitational and Hall of Fame Invitational. The NCAA and Big 12 Championships, which take place in the spring, will also be hosted in Austin.

The Longhorns came in as the No. 1 team in America, according to the College Swimming Coaches Association of America TYR Top 25 rankings that were released on Oct. 10. Texas brought in the top-ranked recruiting class of the 2018-19 season, led by Matthew Willenbring, Jason Park — both top 20 recruits — and Krueger.

Kibler highlighted the class, though, as his personal best 200 free time would have qualified him for the 2018 NCAA Championships last season.

Kibler finished sixth in the 200 freestyle with a finals time of 1:38.29, just behind Haas, who finished in fifth place. Meanwhile, All-American Harty took second place in the 100 backstroke with a time of 47.96 seconds, just getting narrowly edged out by Gabriel Fantoni of Indiana University, who won by 0.09 seconds.

The losses are a disappointing start for Texas, but not insurmountable, as they fell last year in the same circumstances, eventually beating both teams late in the season on the way to their fourth-straight NCAA title.