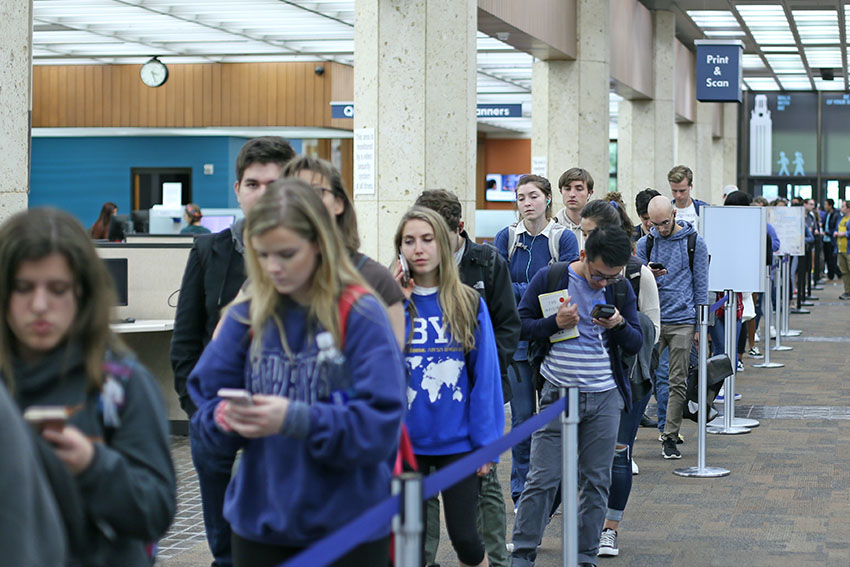 A line of students extended from the ballot boxes in the back of the Perry-Casteñeda Library to the metal detectors at the entrance Monday as students participated on the first day of early voting.

“I think people are pleased with the new location,” said student body president Colton Becker, who waited in line with vice president Mehraz Rahman for early voting. “It’s located conveniently next to a lot of the dorms in a very high-concentrated, central location, and I hope that will translate to greater student engagement.”

While Monday marks the first day of early voting for midterm elections, it also marks the first day the PCL would be used as the campus’ second polling location. The Flawn Academic Center served as UT’s only polling location since 2005, but increasing voter turnout since 2016 made wait times hours long. This prompted Travis County Clerk Dana DeBeauvoir to pass legislation to open the PCL as a secondary location with help from TX Votes, UT Democrats and State Rep. Gina Hinojosa.

Maya Patel, TX Votes vice president, said voter turnout at the PCL needs to be high in order for it to remain a permanent polling location.

“Polling locations are large costs for the county, especially early voting locations, so they can’t justify the costs of having a second location on campus if we don’t use it,” chemistry senior Patel said.

Around midday, some students in line reported wait times at the PCL to be around an hour long.

Kelton Dillard, temporary deputy county clerk in charge of the PCL polling location, said he considered the turnout at the PCL to be moderate to high around midday even though turnout in the morning was low.

“It really wasn’t until about 10:30 a.m. when there were any significant lines,” Dillard said. “Even though it’s a midterm election, there’s an awful lot on the ballot, and we were expecting to have that turnout.”

Téya Kroeker, French and apparel designs senior, said she did not mind waiting at the PCL for an hour and a half before reaching the front of the line.

“Time went by really quickly, and I think voting is super important, so I’m down to wait,” Kroeker said. “If we want a government that represents the views of the people, we’re not going to get that if we aren’t out here telling them what we want.”