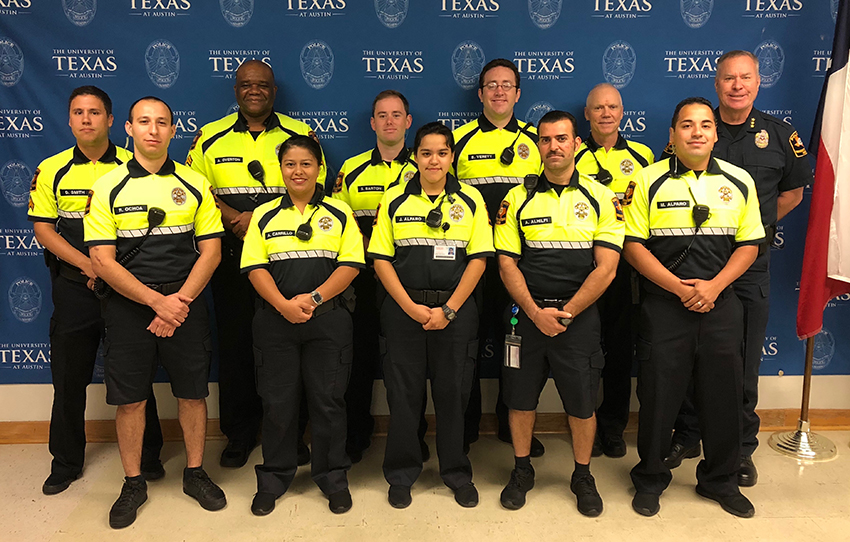 UTPD previously had more than 50 security guards at various locations around campus, along with regular police officers. UTPD Chief David Carter said he made 11 of these guards into public safety officers by changing their titles and uniforms in early September to fit with the jobs of similar officers at other public universities.

“Other universities have police officers and they have public safety officers, which are basically mobile security guards,” Carter said. “But we see them a little bit differently. Their primary mission is to be ambassadors and go out and be extra eyes and ears for the campus and UTPD.”

“They’re not police officers per se, but they are out there as community servants working to support our University and especially our students, as well as faculty, staff and visitors,” Carter said. “It’s healthy for students to see these officers out there and know that they can report things to them.”

Because the officers are non-commissioned and are not licensed to be police officers, they do not have the ability to arrest people, carry a weapon or respond to emergencies on campus.

Donald Smith, one of the public safety officers, said despite not being a commissioned officer, he still works to keep the University safe by easing the workload of commissioned officers who are often preoccupied with alarms and providing an
increased police presence on campus.

“We get to know people and really understand what people’s concerns are and how they feel about things,” Smith said. “It’s a great way to get a more intimate relationship with the staff and students of this University.”

“I think it’s a great change,” Torres said. “I would personally feel bad if I was asking a police officer for directions on where something is or if they could help me look for something. So, having a public safety officer whose job is just to help with the smaller things is a great idea from UTPD.”

Smith said he enjoys the freedom of being a public safety officer and hopes to continue having positive interactions with the University community throughout the school year.

“I just want people to know that we’re approachable,” Smith said. “If you have any concerns, any questions or anything else and you see us out there, you can come and talk to us and we’ll gladly help you however we can.”