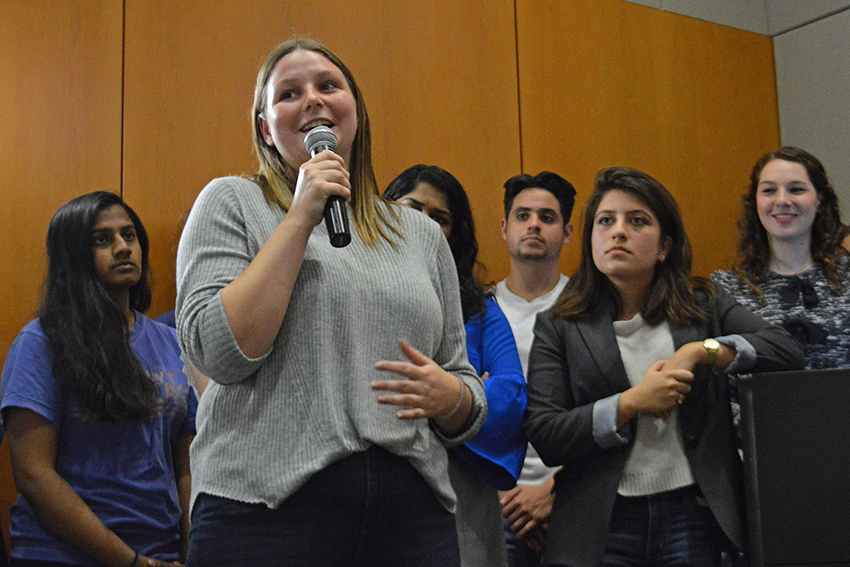 Assembly Resolution 4, approved unanimously, was first introduced Oct. 9. A week earlier, the Young Conservatives of Texas hosted a rally calling for the nomination of Kavanaugh, who was accused of sexual assault and then confirmed to the U.S. Supreme Court in a 50-48 vote by the Senate.

“We want this to … encourage people to want to learn about sexual assault prevention and survivors and advocacy in general,” said Isabella Fanucci, Interpersonal Violence Prevention Policy director. “It should be a preemptive list that could make change before it’s necessary.”

In addition, SG will work with Not on My Campus to train all SG assembly and executive board members in preventative education, bystander intervention methods and the resources available on campus for survivors, according to the legislation.

The legislation states SG will adjust its 2019-20 budget to allow more money for Interpersonal Violence Prevention and the Student Safety agency for resources for sexual assault survivors as well as fully fund SURE Walk.

“The main thing we are emphasizing is that SG is standing in solidarity with survivors of sexual assault or sexual violence,” said Fanucci, speech language pathology and psychology junior. “One of the main things we’ve worked with everybody on is consolidating three main action items to come from this because we want it to be meaningful.”

The Women’s Resource Agency, several student organizations and assembly members also introduced A.R. 8 in support of putting free menstrual products in all academic building restrooms. The agency is meeting with Darrell Bazzell, UT’s chief financial officer, later this month to discuss how to best fund and implement the idea.

Ximena Alvarez, Women’s Resource Agency co-director and legislation co-author, said male, female and gender-neutral bathrooms will most likely contain dispensers distributing free pads and tampons if the proposal is adopted by the University.

“Recently there have been studies that have shown that if you experience period poverty, meaning if you do not have the resources or the financial means to get your own period products, you are more likely to suffer from depression, anxiety or likely to skip class,” said Alvarez, a theatre and dance senior.

“Sometimes administration can be disconnected from the student population, so they may not even be aware that this is something that crosses girls’ and people who have periods here on campus’ minds,” nutrition junior Cruz said. “In some sense there is a stigma when it comes to women menstruating, and with this initiative we can start tearing down that stigma.”