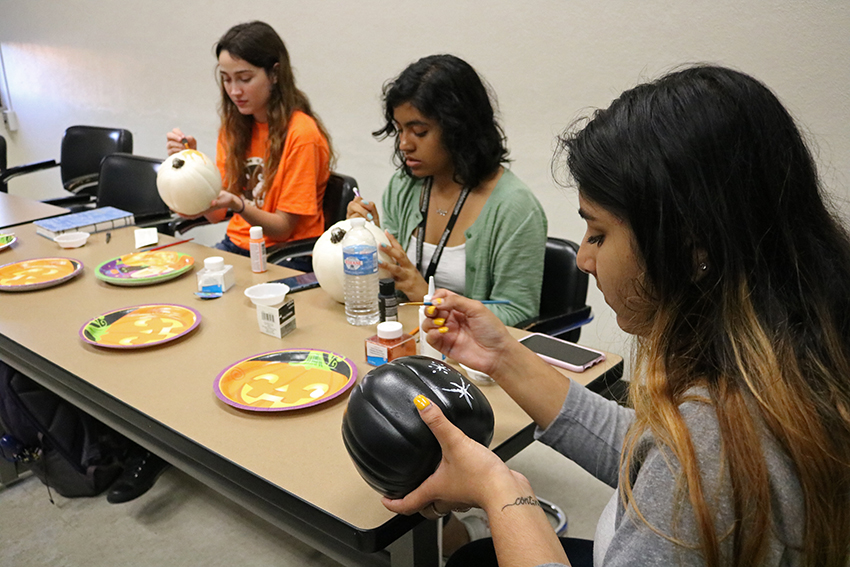 UT has a new crafting and DIY organization where students can go relax and unleash their creativity.

Every week, members of The Crafty Society meet to take part in activities such as lantern painting, bookbinding and making figurines out of clay. In the spirit of Halloween, Friday’s craft was pumpkin decorating while watching the movie “Coraline.”

“I didn’t see enough arts and crafts orgs on campus, and I really like doing DIY projects and arts and crafts,” Crafty Society president Victoria Allen said. “So, I felt that there was a need for one, and I was just really excited about the idea of doing it.”

The Crafty Society has grown significantly since its emergence, and it currently has about 70 members.

“We were gathering people just from … Party on the Plaza,” studio art junior Allen said. “It grew pretty fast. We started with, like, 10 because I first started talking about the club in the spring. Then by August, there were, like, 45 people on our Facebook page.”

None of the members pay dues because of funding they received from the Fine Arts Council, Allen said. The organization meets Fridays 5-9 p.m. in CBA 4.344.

Business freshman Keyi Ouyang said her favorite activity was making clay charms, which some members turned into keychains. Ouyang said she enjoys being able to come to The Crafty Society after a week of class to ease stress.

“I really like the environment here because it’s really relaxed,” Ouyang said. “Some drawing (organizations), you have to be a certain level where you have to draw a certain thing, but this one’s more free-minded. You can just do whatever.”

Despite being art-oriented, the organizaiton members are not all art majors. Biology freshman Annabelle Vincent said the meetings provide her with relief from her stress.

“Biology is really academically challenging, and I spend a lot of time doing academically focused stuff,” Vincent said. “I do too much. So, I need somewhere to relax, and this is my relax time.”

Allen said she tries to make the group enjoyable for everyone. Psychology freshman Nimisha Jain, who is new to the group, said she likes her experience so far.

“I’ve only been here for a little while, but everyone that I’ve talked to has been really sweet, and it’s been a really welcoming atmosphere,” Jain said.