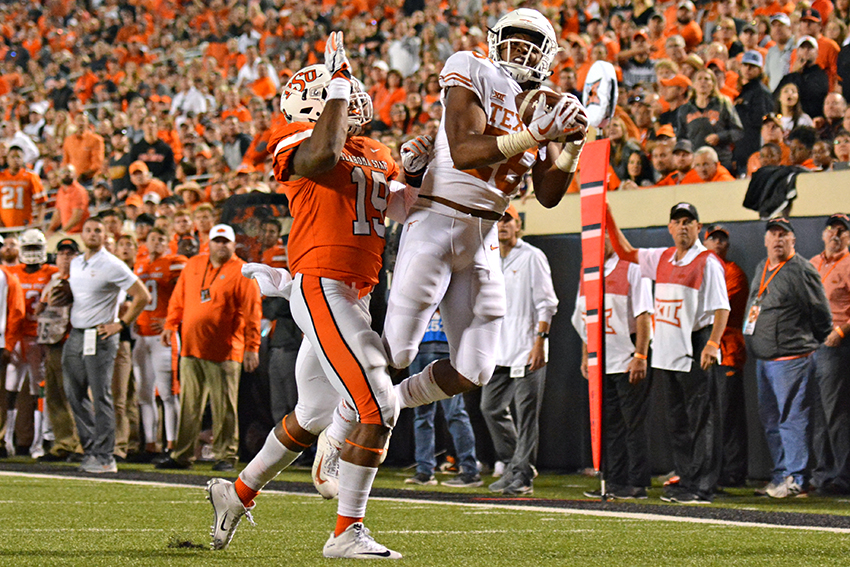 The week Longhorn fans feared would come finally arrived. The trip to Stillwater, Oklahoma, as the No. 6 team in the country resulted in an lopsided first half and a late-game disappointment.

Trailing by 17 at halftime, the Longhorns dug themselves in an uphill battle but eventually cut the lead to a one-score game in the fourth quarter. When they needed a stop in the closing moments though, Oklahoma State’s offense prevailed, leaving Texas with its first loss in nearly two months. Now, the Longhorns’ new standing lies with the College Football Playoff committee.

The Sooners now own the most overall wins in the Big 12 after throttling Kansas State. Although they are on pace to finish with the best record in the conference, Texas Tech will try to change that Saturday night. Oklahoma looks as formidable as it did going into the loss against Texas. Lincoln Riley’s team still has not lost a beat on offense and the defense is turning the corner. Right now, Kyler Murray and the Sooners have an inside track to the conference championship right now.

However, they will have to go through either Texas or West Virginia to secure a fourth-straight conference title. The College Football Playoff is still very much in play for them as well. They may need assistance to get there, but it wouldn’t be shocking to see Oklahoma as one of the final four teams standing once again.

Sitting at first in the conference, West Virginia still has to prove itself. The Mountaineers lost to an unranked Iowa State team two weeks ago, causing their ranking to drop, but rebounded with a dominant 58-14 win over Baylor last Thursday. It’s been heavily noted that two of West Virginia’s last four games are against Texas and Oklahoma. At least one of those games is bound to have Big 12 Championship implications.

The Mountaineers will have plenty on their plate during the final stretch of the season so there will be no shortage of opportunities to move up in the polls and validate themselves as an elite team. If West Virginia is able to secure this season’s Big 12 title, it would be the program’s first conference championship since joining the conferencein 2012.

Iowa State quietly moved into the upper third of the Big 12 with last week’s 40-31 win over Texas Tech. The Cyclones are on a three-game winning streak and they’re now over .500 after starting the season 1–3. After upsetting West Virginia and outscoring Texas Tech, the Cyclones have a perfect opportunity to win at home against Kansas on Saturday.

The hardest part of their schedule has passed, and with three of their last four games coming against teams in the bottom third of the conference standings, expect for Iowa State to be bowling in December for the second- straight year.