Homeless activist finds peace at Graffiti Park, says “this is what I created” 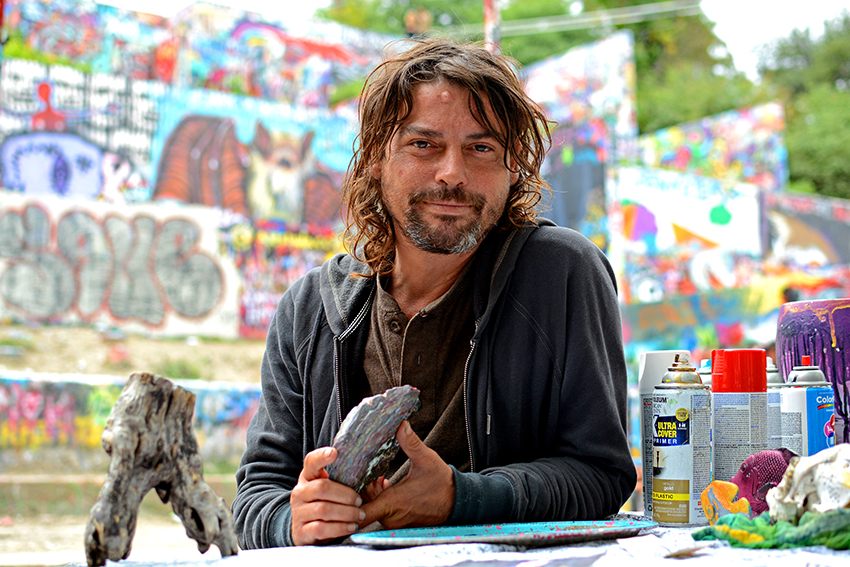 For most, the announcement of HOPE Outdoor Gallery’s impending relocation meant added travel time to the new gallery. For Jesse David Greiner, it meant discontinuing the work he has loved for almost 10 years.

In March 2011, Greiner saw volunteers building what is now the Graffiti Park. After discovering the gallery volunteers’ intent, he began to help and has been at the park almost every day since.

“I love artwork. When I first came up here, there was actually a lot more murals and a lot less scribble (because) it wasn’t that big,” Greiner said. “It just slowly kept getting bigger and bigger.”

With the expansion, Greiner began to give tours to those who ask and keep the wall as clean as possible. To help prevent chunks from falling off of the wall, he uses a hammer and chisel to remove hollow pieces and makes sculptures from them.

He sells his creations and calls himself a “nonprofit.” While he and HOPE respect each other, the organization does not want him on the premises in a vending capacity. Miles Starkey, the arts
project director at HOPE, said it is for Greiner’s protection.

“It’s private property, so any vending is not permitted,” Starkey said. “We’re just trying to protect (the people who vend) against code, because code will issue pretty heavy fines if they find people up
there vending.”

However, after the park moves, HOPE will no longer have to worry about Greiner. Although Greiner calls the park his “second home,” he will not move with it because of the changes being made.

“It’s going to suck for all (the people in the community) too, because there won’t be a place like this to go to,” Greiner said. “When they build the new park it’s not going to be anything like this.”

As a humanitarian activist, Greiner viewed the chaos of the Graffiti Park as a way to step back from the “stupidity out there.” He said the rare wins in activism are rewarding, but the work required
is draining.

Greiner said his ideas for a new place to find solace are confidential until he is certain on his new direction. Until then, his focus will shift back to activism and his work at “The Challenger,” a newspaper published and produced by the homeless or formerly homeless. Valeria Romness, director and editor of the publication, said she is happy to see him returning to full time work with the paper.

“He often has been the top distributor,” Romness said. “He’s a really good salesman. He’s got the gift of gab.”

For Greiner, the days of staying at the park for weeks on end to protect gorgeous murals are coming to an end, but he says “nothing here lasts forever.”

“This is the only place I’ve ever seen where it could be pouring down rain in December at three in the morning, and somebody will be up here doing something,” Greiner said. “HOPE started it, (but) with the help of other artists, this is what I created.”