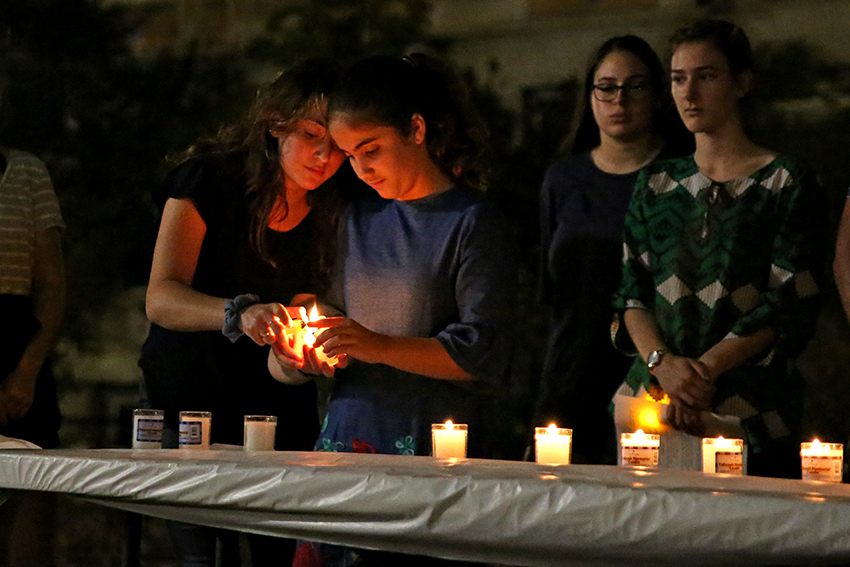 As the UT tower bell tolled Monday night, students and faculty gathered at the banks of the Turtle Pond to read the names of the 11 Jewish lives lost on Saturday and light a corresponding candle for each.

A man armed with an AR-15 and three handguns killed 11 and injured six when he opened fire at the Pittsburgh Tree of Life Synagogue in the deadliest attack on the Jewish community in the country’s history. The vigil included a speech from rabbi Zev Johnson and a performance on guitar by Jason Taper, Plan II and government senior. Attendance exceeded 100 people.

Zach Epstein, Jewish Studies and Plan II sophomore, said he was in his synagogue on Saturday when he heard about the attack.

“Being a Jew and going through the same weekly routines and being in such a similar community, even if it’s not in the same location, really connects you to what’s going on,” Epstein said.

Epstein is the leadership chair of the executive cabinet at Texas Hillel, a campus Jewish community center, and organized the vigil in cooperation with Jewish center Chabad at Texas. He said it was important to him that the event focused on collective mourning and not politics.

“In the Jewish world, mourning is incredibly important,” Epstein said. “It’s important for people to take (political) action. I don’t think this is the place to do it.”

Cole Deutch, Plan II and economics sophomore, attended the vigil and said he felt personally affected by the shooting.

Maiya Chard-Yaron, executive director of Texas Hillel, said she was very proud of the students who organized the vigil.

“For Hillel, I thought it was very important to support our students for creating this space on campus to come together to mourn, to share, to sing,” Chard-Yaron said. “What I’m hoping is that we can move forward from this in a place of sharing and solidarity and having a really strong community that’s against hate in all its forms.”