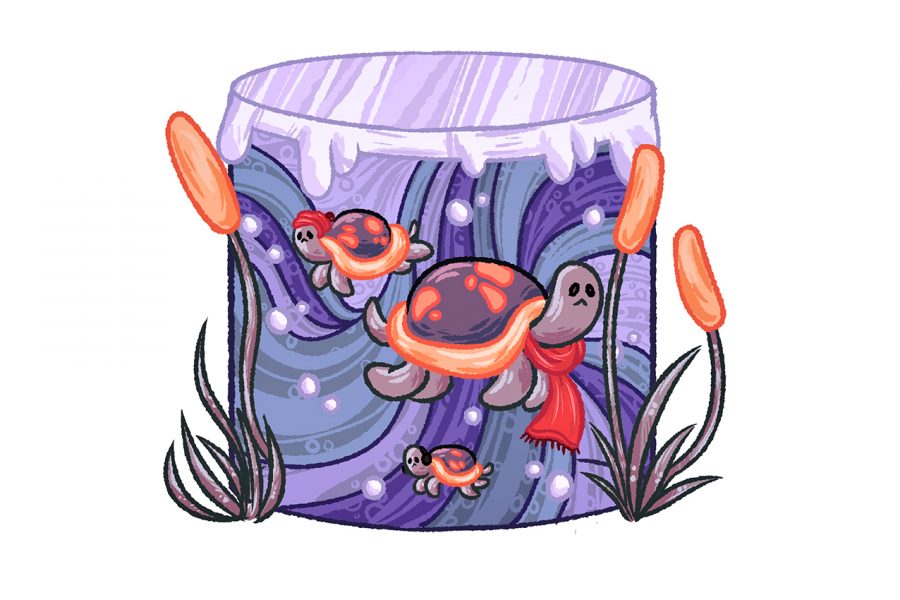 Students need not fear about the residents of UT’s turtle pond this winter, as the turtles will spend the colder months safe and submerged, said integrative biology professor David Hillis.

The turtle pond, which is located north of the UT tower, contains more than 100 turtles of four different species. Hillis said these animals may not appear at the site for long periods during the cold season.

“They become less active and can stay submerged for many days or even weeks,” Hillis said in an email. “They will still come out and sun on warm days.”

Radio-television-film sophomore Collin Gwin said he visits the turtle pond frequently on his way to class, because it improves his day.

“In the winter, I wonder where the turtles are on a weekly basis,” Gwin said. “I know a lot of people wonder the same thing. I feel sad and I feel betrayed that no one has told me where they go.”

Hillis said the turtles’ extended submersion is possible, because they can respire through their cloaca, a cavity used in their reproductive, urinary and digestive tracts, and because of how their bodies adapt to the cold weather.

“Their metabolism drops dramatically in cold water, so they don’t need a lot of oxygen,” Hillis said.

History senior James Moore said he stops by the turtle pond three times a week. Moore said he has never known where the turtles go in the winter, but he notices when they disappear.

“I like the presence of the turtles,” Moore said. “It’s cathartic to watch them. I suspect that their absence might have a small impact on the people at this space.”

For the turtles, Hillis said the decrease in temperature does not have a serious impact.

“People seem to wonder about our turtles on campus, but the campus turtles are living exactly like wild turtles do,” Hillis said. “We try to provide as natural a setting and conditions as possible, and they thrive as a result.”

Hillis added that the pond’s winter climate pales in comparison to other places where the turtles are found.

“These species live in much colder places than Austin and survive the winter under thick ice,” Hillis said. “Here, our pond rarely even freezes over, so they have it easy.”