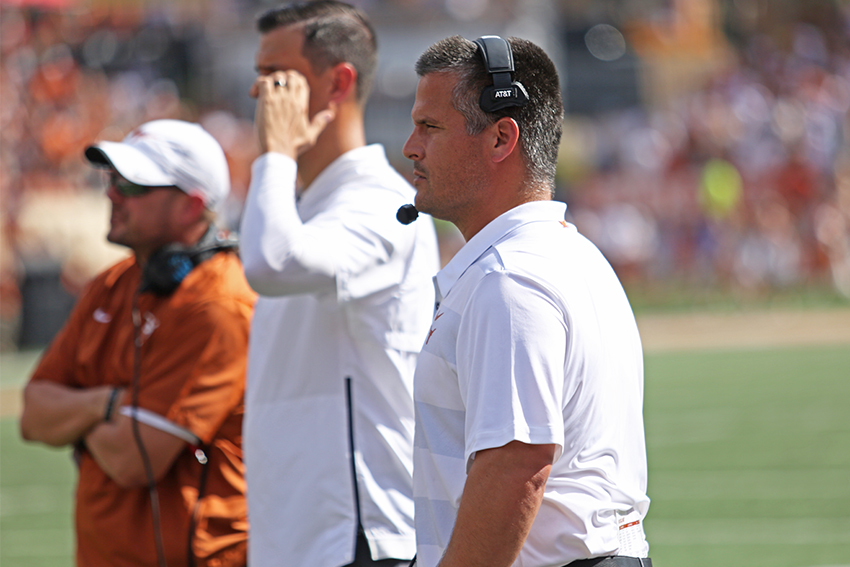 When Oklahoma State capped off its opening drive with a touchdown less than two minutes into last Saturday’s game against the Longhorns, the groans from Texas fans didn’t represent confusion. They resembled cries of déjà vu.

The Cowboys’ quick score wasn’t the first occurrence this season where the Longhorns found themselves kicking off to their opponent only to give up six points just minutes later.

Saturday’s result was the fifth time this season Texas allowed its opposition to land the first punch, and it’s now become an issue the Longhorn coaches have addressed.

“We went back and studied the whole thing on Sunday night,” defensive coordinator Todd Orlando said Wednesday. “There were a couple plays that they saw what we were in and got completions on us, but it’s just letting it go in the beginning of ball games. It seems like we start to settle down.”

Texas announced two days prior to the game that its two starting cornerbacks, Kris Boyd and Davante Davis, were suspended for the first quarter against Oklahoma State. Still, when the coin flip landed in the Longhorns’ favor, defensive end Breckyn Hager chose for the team’s defense to take the field and start the game.

Despite this happening multiple times this season, Texas head coach Tom Herman said he hadn’t even thought about it until after the loss in Stillwater.

“I brought it to Todd’s attention yesterday,” Herman said during a press conference Monday. “But yeah, last year was the opposite. So we’ve just got to figure out why and make sure, but I don’t have a great answer for you right now.”

Thankfully for the Longhorns, many of the early slip-ups didn’t prove to be very costly as they entered last week’s matchup going 3–1 in games after allowing the first score. But the Cowboys’ wide receiver Taylan Wallace’s 40-yard touchdown reception clearly set the tone in the Cowboys’ favor as they jumped out to a three-possession lead early in the second quarter.

An obvious solution might be for the Longhorns to defer at the opening coin toss and choose to let the offense take the field first, but Orlando views the issue as a roadblock Texas should try to overcome rather than avoid.

“Like I told Herm — and I’ve said this since we were at Houston — you don’t even have to ask me,” Orlando said. “The worst thing a coordinator could do is say, ‘Hey, let’s get the ball because I’m over here worried about first possession.’ That ain’t ever gonna happen. That’s the way we do it around here.”