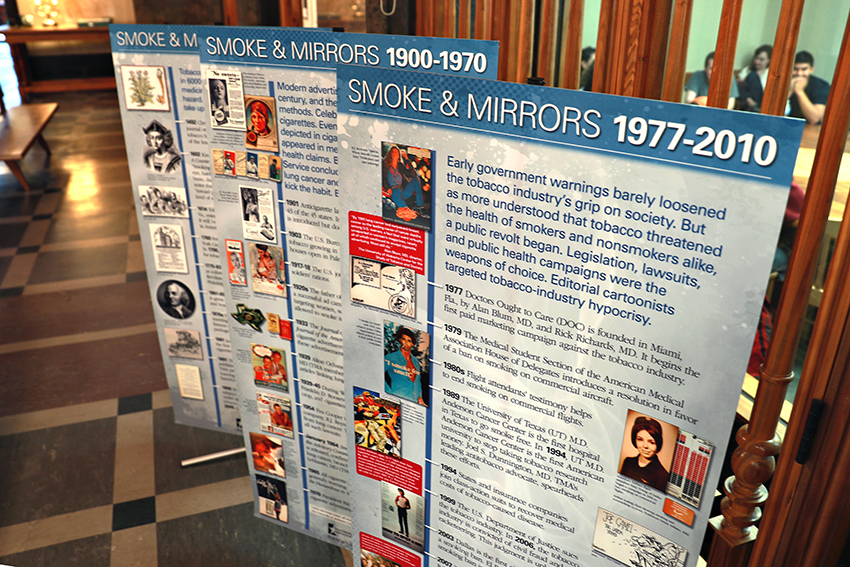 The new Smoke and Mirrors exhibit in the Life Sciences Library hopes to clear the air on the public perception of tobacco use through a time line of tobacco from as early as 1492 to 2010.

On loan from the Texas Medical Association, the three banners making up the exhibit are decorated with multiple advertisements detailing the growth of both tobacco and anti-tobacco movements. Librarian Roxanne Bogucka, who organized the exhibit at UT, said she hoped the posters would educate the public about America’s relationship with tobacco.

“I recently saw some things about tobacco-free UT,” said Bogucka. “With the Great American Smokeout on the third Thursday of November, I thought this was really timely. A lot of students here don’t have the experience of being in a campus full of tobacco, so I thought this would be very educational.”

What makes the exhibit unlike other educational counterparts is its emphasis on the advertisements both for and against smoking. Koonj Shah, a pulmonologist and assistant professor at Dell Medical School, said that presenting tobacco companies’ marketing tactics to the general public is a good way to advocate against smoking.

“Our office, which treats pulmonary disease, has an ad from the 1950s,” said Shah. “There’s this doctor in a white coat holding a cigarette, and he’s saying he only smokes Marlboros. We keep it as a reminder of where advertising used to be … doctors used to actively promote smoking.”

Shah added that the public perception has changed for the better, but work still needs to be done — about 60 percent of his patients still come in with smoking-related conditions and diseases.

“COPD, emphysema, lung cancer — all of those (diseases) are directly related to smoking,” Shah said. “Women who smoke daily have a six times higher chance of getting a stroke, while men have a four times higher likelihood. But a lot of people don’t know about these risks, and that’s why advertising still has so much room to improve.”

Joel Dunnington, who is a member of the association, retired radiologist and anti-tobacco activist, said he hoped to inspire this kind of reaction in the exhibit. He contributed many of the advertisements featured throughout the banner’s time line.

“Advertising is so important … with smoking affecting so many people, it’s all about the type of message you can give to that audience,” Dunnington said.

Dunnington added that big tobacco companies were particularly good at crafting a pro-tobacco image toward children and adolescents. Tobacco ads today are placed at knee-level and near the candy in convenience stores in order to target younger audiences, Dunnington said.

Overall, the exhibit has one clear and simple message.

“Just don’t smoke,” Dunnington said. “For yourself and for your children.”