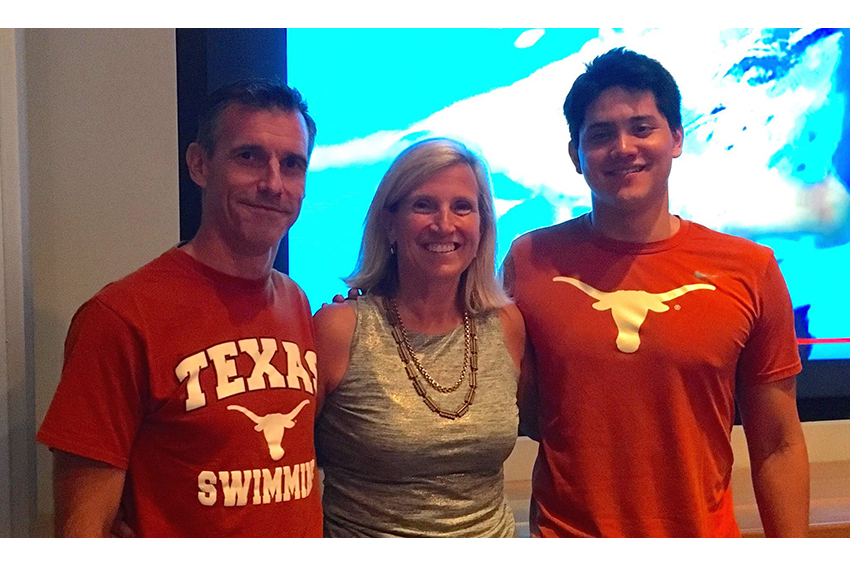 Long-distance swimmer Ben Lecomte is a little over one third of the way done with his swim across the Pacific Ocean, and he is helping UT researchers along the way.

Lecomte will be the first person to swim across the Pacific Ocean and tracks his progress daily on a blog called “The Swim.” In June, he began his 5,500-mile swim from Tokyo to San Francisco, aiming to complete the journey in six to eight months.

Before leaving, he met with UT researchers about how he could contribute to science projects during his journey.

“Ben was looking for ways that he could maximize the effort and bring attention to ocean health,” said Robert Dickey, director of the UT Marine Science Institute.

Lecomte strategized with UT-Marine Science Institute faculty on collecting algae and microbial organisms during his swim and sending them back to (the faculty) for research, Dickey said.

“It was a very unique opportunity to get some unique samples from the middle of the Pacific that we might be able to analyze and learn something about the biomass that is being created,” Dickey said.

Marine science professor Tracy Villareal said he asked Lecomte to look for phytoplankton floating on the ocean’s surface and track his observations.

“He’s in the water all day long swimming, and he’s tired, so we can’t ask for a whole lot,” Villareal said. “But he’s got a pair of eyes in the water looking at things.”

“A normal research vessel is about $50,000 a day,” Villareal said. “These are places in the open sea that I’d like to study, but it can take two to three days to get there. So the bill for getting a party out there is high.”

Lecomte has also served as a class project for nutrition students. Molly Bray, department of nutritional sciences chair, said her sports nutrition class a few years ago advised him on foods that would satisfy his daily intake of 8,000 calories.

“We talked to him about dairy and taking things that maintain bone health,” Bray said.

Bray’s class also advised Lecomte about weighing himself regularly and maintaining sufficient electrolytes. Ultimately, Bray said the experience may have inspired students to focus on sports dietetics as a career.

“I think meeting him was inspiring anyway,” Bray said. “Live big, and do big things.”