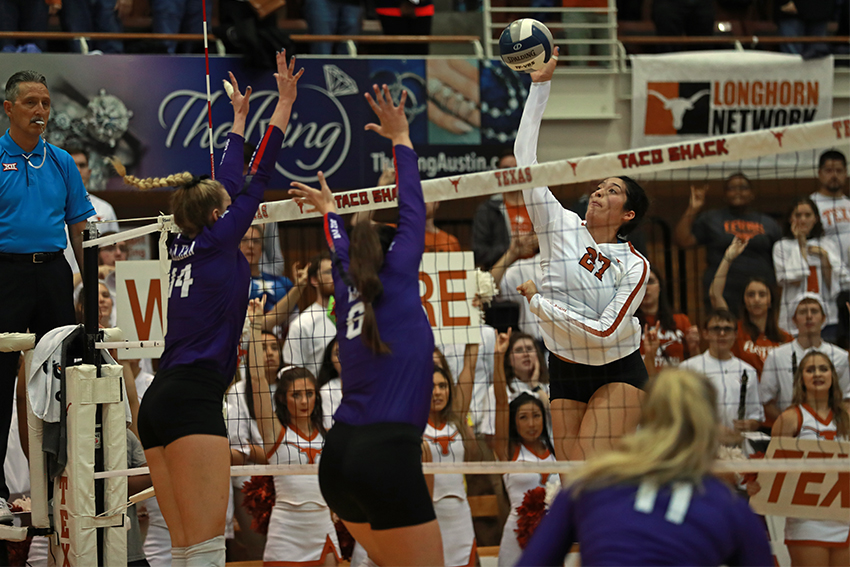 Halloween gives most people a chance to be creative. Getting into a scary, funny or even downright silly costume is just part of what makes it a fun occasion.

But the Longhorns? They arrived at Gregory Gym as themselves.

After TCU pushed its last matchup with the Longhorns to five sets nearly a month ago in Fort Worth, there was no hiding No. 6 Texas’ identity Halloween night as the Longhorns picked up a 3-1 win Wednesday (25-13, 20-25, 25-17, 25-23) and remained hot heading into the tail end of conference play.

“It was a challenge for us,” head coach Jerritt Elliott said. “We found a way to get the win playing ugly a little bit.”

Texas picked up right where it left off in the first set. After closing Saturday’s bout with Oklahoma on a 7-2 run, it started off with a quick 7-1 run to gain control of the opening set. A methodical attack did the rest of the work as the Longhorns finished off the Horned Frogs to take a 1-0 lead.

The second set brought back shades of the two teams’ previous five-set thriller. A back-and-forth affair had the set tied at 11 apiece before the Horned Frogs gained some distance. Behind the eight kills by senior middle blocker Anna Walsh, TCU controlled the second half of the set and evened up the match.

The Horned Frogs didn’t go down without a fight. After Texas handily took the third set, the Longhorns held a six-point advantage in the third frame. The Horned Frogs fought back to tie it at 22 courtesy of a 7-1 run, but Texas proved to be too much on the offensive end in crunch time.

“We just never felt comfortable the whole night,” Elliott said. “This is kind of the grind of the season where things get really tough. My goal is to give them a little break emotionally right now and get them fresh.”

As the game went on, setter Ashley Shook struggled to find her usual rhythm, which kept her sets slightly off target on several occasions. This opened the door for freshman libero Jhenna Gabriel to make the most of her first time running the Texas offense.

Gabriel finished the game with 22 assists and three digs in three sets of action. While the impact might not have been apparent on the stat sheet, Gabriel turned out to be the reason Texas made it to the finish line.

“I stepped on the court and everybody that was on the court came up to me,” Gabriel said. “(They) grabbed my hand and made that eye contact just so that we could go right into it without having to go backward before we can go forward.”

Texas largely got through the game on the offensive end because of the play from senior outside hitter Yaasmeen Bedart-Ghani and outside hitter Micaya White, who tallied 14 and 17 kills, respectively. The Longhorns will continue to depend on them heading into the home stretch of conference play.

“I think we’re starting to find our stride,” Bedart-Ghani said. “You can see the progress throughout the season, and I think that we’re peaking at the right time.”

The Longhorns will continue their three-game homestand against Kansas State on Wednesday, Nov. 7. First serve is set for 7 p.m.