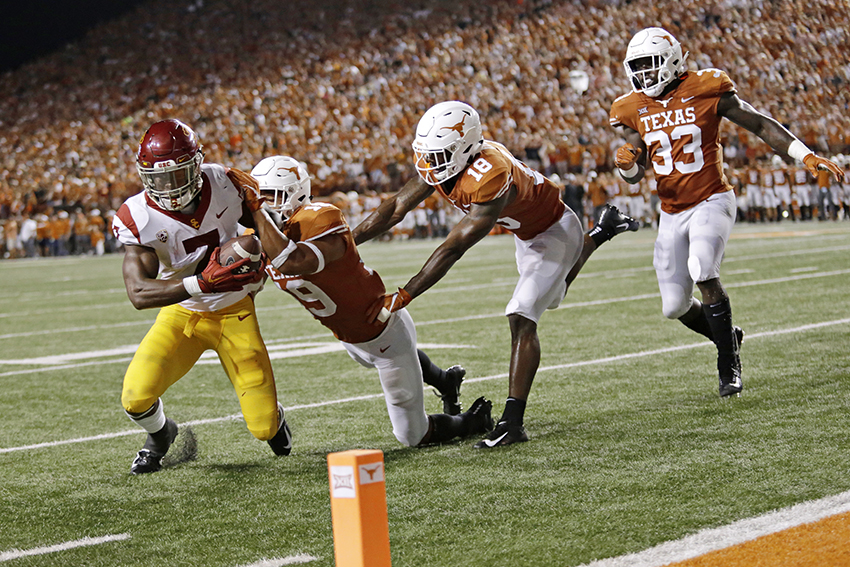 From Baton Rouge to Lubbock, Week 10 brings with it yet another jam packed slate of must-watch games. Here are the matchups you won't want to miss:

Before a de facto SEC West title game kicks off in the bayou, Georgia and Kentucky square off to take charge of the SEC East. The Wildcats’ dream season overcame a major obstacle in Missouri last Saturday, clawing back from an 11-point deficit to win on a walk-off touchdown by tight end C.J. Conrad. Likely Doak Walker finalist Benny Snell Jr. is continuing his rampage at running back, rushing for over 160 yards on three occasions. But it’s atypical to see offenses experiencing success against Georgia, which allows 16.4 points per game. The Bulldogs bested Florida in Jacksonville last Saturday and look to carry the momentum into Lexington for a probable SEC title game in December.

The last two meetings between the Big Ten East foes have been blowouts in favor of the home teams. Jim Harbaugh has Michigan positioned in the top five once again, earning a bye week after demolishing Wisconsin and Michigan State in consecutive weeks. With linebackers Devin Bush and Chase Winovich leading the charge, Michigan possesses the nation’s best yards per game defense, allowing 220 yards per contest. If there’s anyone who can fight to gain extra yards against the Wolverines, it’s Penn State quarterback Trace McSorley. A warrior of an athlete, McSorley returned from a mid-game injury last week to rush for a 51-yard score and usher in the Nittany Lions’ first win over a ranked opponent this season, topping Iowa.

No. 4 Notre Dame at Northwestern

How many close calls can Notre Dame survive before someone hands the Fighting Irish their first loss? Ian Book, undefeated as a starting quarterback in his collegiate career, looks to build on his career-high 330 passing yards he attained against Navy last week. With 6-foot-7-inch defensive tackle Jerry Tillery manning the defense, Brian Kelly’s team is laden with talent on both sides of the ball. Northwestern is one of the hottest teams in the nation, winning four straight, including double-digit victories over Michigan State and Wisconsin. The Wildcats own a two-game win streak in the series, looking to extend it and jump into the rankings with a win.

Under the lights in Death Valley, the first top-five matchup of the season awaits. The last Alabama-LSU meeting with both teams situated in the AP top-four was the BCS National Championship at the conclusion of the 2011 season. LSU’s suffocating defense took Georgia and Mississippi State as victims in its last two outings, but containing Alabama’s offense led by quarterback Tua Tagovailoa won’t be as simple. The Crimson Tide rank first in points per game nationally (54.1), and no team has come within 22 points of Nick Saban’s dynasty this year. Baton Rouge is a challenging stop for visitors, but there will be a lot of pressure on Ed Orgeron’s Tigers to upset the dominant Tide and continue the push for the program’s first playoff appearance.

No. 7 Oklahoma at Texas Tech

The tortillas will be in full force, and possibly on the field, in Lubbock on Saturday night. Texas Tech’s offense has been stellar all season under quarterback Alan Bowman. He threw for his fourth 300-yard game last week in a loss to Iowa State, but the freshman could be in for a field day against Oklahoma’s inconsistent defense. Ever since a close loss to Texas, the Sooners have rolled two 3–5 Big 12 opponents in TCU and Kansas State. The Red Raiders will provide a step up in the competition, but Heisman candidate Kyler Murray (28 touchdowns, three interceptions) has proven he can pick apart any defense in the country.