Concerns continue for Texas defense after marquee matchup against Mountaineers 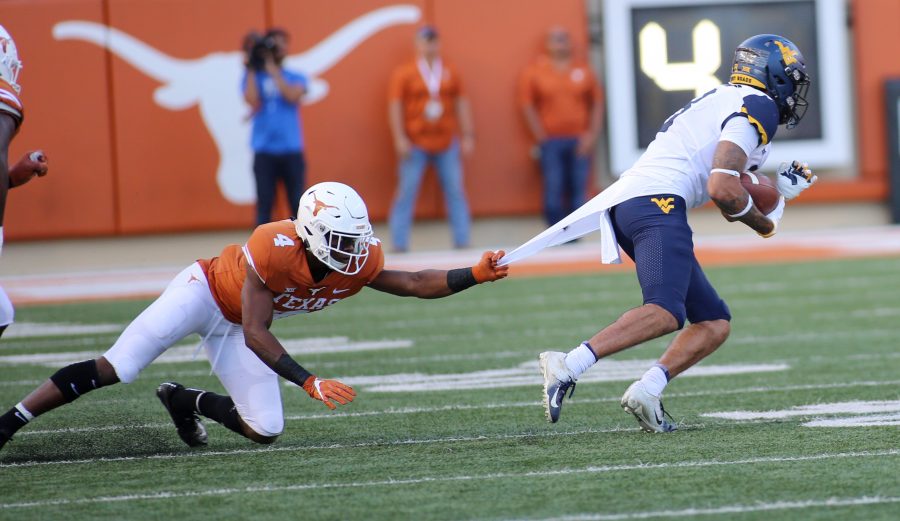 For the second consecutive week, the Longhorns watched the final seconds tick off the game clock, knowing their path to a Big 12 Championship just became more difficult.

Texas fans left Darrell K Royal-Texas Memorial Stadium in dejection on Saturday night after West Virginia quarterback Will Grier darted out of the pocket and into the endzone for a successful two-point conversion in the closing moments to give the Mountaineers a 42-41 victory over the Longhorns.

In what was expected to be an offensive shootout from the beginning, the Longhorn defense struggled to limit Grier’s dynamic passing ability. But something less predictable was that Texas’ inability to stop the Mountaineer rushing attack would be the most glaring error on the stat sheet.

“I know it sounds a bit counterintuitive when you’re lining up against Will Grier and (David) Sills and (Marcus) Simms and those guys, but we’ve got to stop the run or you’re going to bleed a slow death, and for the most part we couldn’t tonight,” head coach Tom Herman said after the loss.

The Longhorns were without safety Brandon Jones after he aggravated an ankle injury Saturday morning at the team hotel. Later, defensive end Breckyn Hager and cornerback Davante Davis were ruled out for the remainder of the game after suffering injuries during the first quarter, which thrusted many inexperienced Texas players into game action.

“This is not us. I wouldn’t say it was us,” defensive tackle Chris Nelson said. “I feel like we played bad, we could’ve stopped the run better — a lot better. But at the end of the day, we were rotating a lot of freshman guys in. I’m used to playing with Charles (Omenihu) and Breckyn (Hager). Once guys go down, you’ve got to accommodate new guys coming in.”

Texas couldn’t hide the absences of its veterans as West Virginia running back Martell Pettaway torched the defense on multiple long runs, leading the Mountaineers’ 142-yard first-half rushing attack — not far off from their per game average of 147.9 rushing yards.

As a result, many leaders on Texas’ defense tried to relay to the younger players that the moment shouldn’t be viewed as any bigger than what it is.

“I saw the look in their eyes so before they went out there, I was just telling guys to calm down,” Nelson said. “‘Calm the game down, and slow the game down’ because I knew it was going to move fast for them out there. That’s what I kept repeating to them. I said, ‘It’s just a football game at the end of the day.’”

The Mountaineer offense continued to outplay the Longhorns in the second half, finishing with 232 yards on the ground by the end of play.

The poor performance understandably didn’t sit well with many Longhorns as they walked off the field hanging their heads in defeat. Among the first to reach the tunnel was defensive end Charles Omenihu.

“We didn’t play good period, dude,” Omenihu said. “We lost. I don’t know, whoever is out there, you’re obviously recruited here for a reason. You’re here to play, so if you get to play you need to make the plays you’re supposed to make and do what you’re supposed to do. If you don't, against a good quarterback, you lose.”

The Longhorns also failed to force a turnover for the second straight game after having a differential of plus-8 over the Longhorns’ six-game win streak.

Texas, who was viewed weeks ago as a potential favorite to win the conference crown in December, has now quickly fallen from the throne of the Big 12 standings, causing a level of concern for Herman and the rest of the coaches.

“I think any time you go through a couple-game stretch the way that we’ve gone through, you’re concerned,” Herman said. “I mean, that’s our job as coaches. I’m concerned that we gave up a sack and we didn’t convert on 4th and 1. There’s a lot to be concerned about on both sides of the ball.”