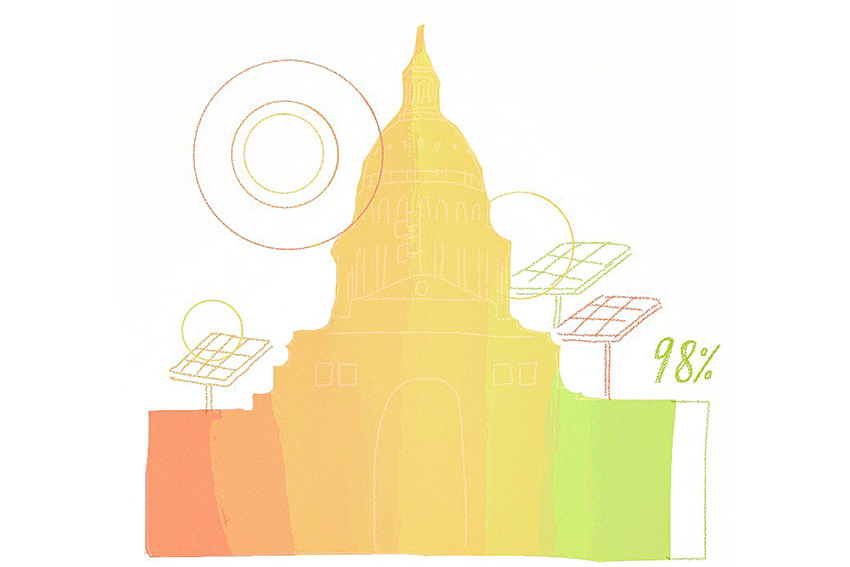 Austin plans to reach 52 percent renewable energy production by 2021 thanks in part to a solar contract approved by the City Council in October that may also reduce electricity rates.

This latest contract is part of more than a decade’s worth of work by the Council to reduce Austin’s use of fossil fuels that contribute to global warming. But this latest expansion stands out from the rest — it is one of the first solar facilities to be built near the City and will be in Pflugerville.

The climate plan was put forth by councilwoman Leslie Pool and cosponsored by Mayor Pro Tem Kathie Tovo. The solar contract is the latest part of that plan and will increase Austin’s solar energy consumption almost 20 percent.

“It’s exciting to see these contracts come in because it’s a good financial value but also meet our city’s value of moving away from fossil fuels and toward clean energy,” said Tovo, who represents District 9.

In the past, solar facilities were built primarily out in the deserts of West Texas, where there was more room and more sunlight throughout the year, said UT energy policy professor Fred Beach.

The falling price of producing solar panels, however, has made it affordable enough to build facilities closer to where the energy is needed despite lower energy production during seasons with more rain or shorter days, Beach said.

“You can build it where you need it,” Beach said. “That’s a powerful tipping point.”

The solar contract is a 15-year agreement with the company East Blackland Solar Project 1 and costs $165 million. However, Austin Energy representative Michael Enger said it should not increase electricity prices for customers and could even reduce rates.

Luke Metzger, executive director of the sustainability advocacy group Environment Texas, said he expected to see an increase in solar use as it became less expensive. Metzger said climate policies like Austin’s that encourage solar energy helped create a market for it that subsequently brought prices down.

“It gives me some hope amid the grim predictions of climate scientists that we do have the technology, we have the public will … to solve the climate crisis,” Metzger said.

Compared to San Antonio, the only other major city in Texas with a regulated energy utility controlled by the city, Austin is far ahead. San Antonio is only at 22 percent renewable energy consumption.

“Austin has always been more aggressive in general in regard to being more conscientious about their electricity generation,” Beach said.

Austin also surpasses Texas in renewable energy use. In 2016, just under 20 percent of the state’s energy came from renewable sources, according to the U.S. Energy Information Administration.

However, several issues stand in the way of Austin reaching its 65 percent renewable energy goal, or even 100 percent farther in the future. One immediate issue is the coal and natural gas plants the city built and owns that still have half or more of their lifespans left, Beach said.

“It depends on how much you’re willing to pay,” Beach said. “To get rid of them now is not cost effective. It’s effective if you want to reduce emissions, so it’s (their) choice.”