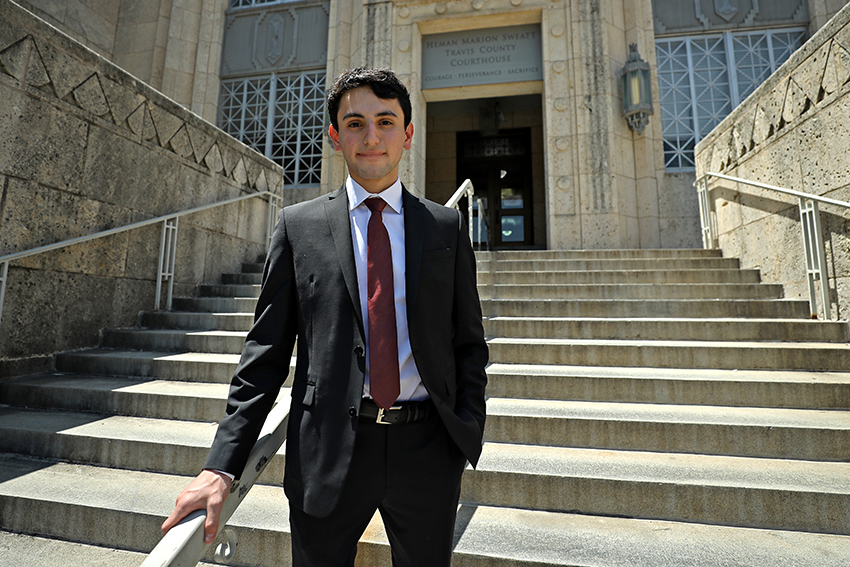 Editor’s note: Rylan Maksoud is a member of the Texas Student Media board.

Update: Following the trial, University House released a statement that said the complex filled all of its leases for the 2018-19 year in less than one week's time, the speed of which resulted in the overbooking that led to the termination of Rylan Maksoud's lease as well as several others'.

"Naturally this left those we couldn’t accommodate frustrated and disappointed," Amy Bennett, regional manager of operations for the Scion Group, said in the statement. "It was an embarrassing mistake, but it was an honest error."

Bennett also said after the mistakes were found that the Scion Group's vice president called each affected person individually and gave them full refunds.

"We have a system in place to prevent this mistake from recurring," Bennett said in the statement. "Our new management staff is making great service for our residents the heart of everything we do, to remain Austin’s most popular student community."

Original story: Plan II sophomore Rylan Maksoud left the Travis County Courthouse on Friday smiling, despite receiving half of what he asked for in a lawsuit against University House.

Nine months earlier, he created a website, austinuniversityhouse.com, detailing his negative experiences with the University House complex. The website garnered thousands of views and led other students to share their experiences with UH. Maksoud said the complex overbooked, offered him a “mutual termination” and then gave him few options other than to sign it and lose his lease. The Daily Texan confirmed at least five students experienced the same situation last school year.

Maksoud said there was nothing mutual about the termination agreement. He asked University House to pay him the difference in cost between UH and the new, more expensive place where he currently lives. He was offered money by the complex in exchange for taking down the site, but he declined and sued for violations of the Texas Deceptive Trade Practices Act.

“The law allows me to triple my damages, so the suit is for $7,722, not including court costs,” Maksoud wrote on his website.

At his jury trial Friday, Maksoud, his parents and several witnesses and friends were present. Two attorneys and two paralegals hired by UH were also there. But no witnesses were called and no jury deliberations were made.

“I was entitled to triple my damages, but the judge seemed like she was trying to prohibit me from what I was trying to say, in regards to (University House’s) pattern of conduct that affected … other students,” Maksoud said. “It was a compromise.”

Despite this, Maksoud walked away with a settlement of $4,500, which was less than the lawsuit asked for but more than enough to cover his damages.

Computer science junior Michael Zetune, a friend of Maksoud’s, went through a similar situation after signing a lease with UH in the fall 2016.

“We signed for a four bedroom apartment at University House, and a few weeks later, they said the apartment we signed for wasn’t available anymore,” Zetune said. “They terminated our agreement for a four-bedroom and offered us a three-bedroom, which was a bit of a mess.”

“I originally signed a lease with them early in my sophomore year, so I could secure junior year housing,” Mofor said. “In short, I’ve just ran into multiple problems when it comes to documentation with this building. My advice for anyone in my situation is to photograph and save everything. Anything that you sign with this place has to be saved, and you should be sure that you screenshot what you originally signed, and obviously have the pictures from when you move out saved as well.”

At the trial, Maksoud represented himself without an attorney. However, he advised other students in the same situation to seek legal aid.

The Daily Texan called and left a voicemail for representatives for UH and The Scion Group, UH’s parent company, but they did not return the request for comment prior to publication.