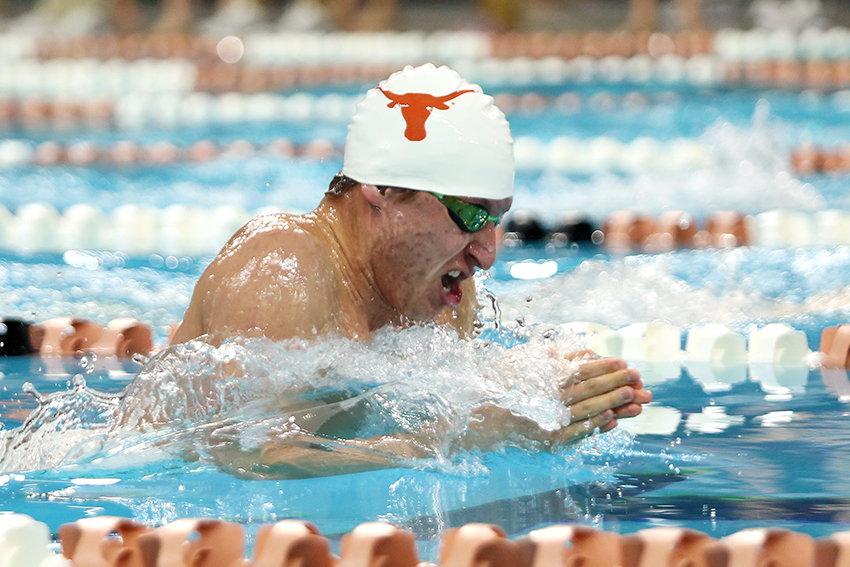 Texas men’s swimming took no prisoners against the No. 12 Texas A&M Aggies on Friday at the Lee and Joe Jamail Texas Swimming Center, coming away with a 180-113 victory led by Drew Kibler and John Shebat.

Texas won 11 of the 16 events, including a 100-yard breaststroke victory from Charlie Scheinfeld. For him, avenging the opening losses to Florida and Indiana weren’t on his mind.

“Given where we are in the season, my mindset was just to improve on what I did at the tri-meet in terms of strategy,” Scheinfeld said after the meet.

Keeping the mentality of being the best you can be individually was something Texas was able to channel.

It was clear the Longhorns had not let their previous two losses affect their mentality for the rest of the year. It was no different for sophomore diver Jordan Windle, who picked up a second in the men’s 1-meter diving and won the men’s 3-meter diving events.

“Coming in, I was trying to stay positive,” Windle said. “I was looking to come in with a clear mind, and there was some really good competition even though some of the Texas A&M divers weren’t competing. It ended up going pretty well.”

Across the board, Texas had some impressive accomplishments during the meet. Most notable was John Shebat, who had the fastest time in the NCAA this year in the 200 IM with a time of 1:59.45, while also taking home the 100-yard backstroke event.

The Longhorns will travel on the road to Knoxville to take on the top 20 Tennessee Volunteers on Friday, Nov. 9. This will be a new challenge as Texas has not taken on Tennessee in their normal regular season rotation in recent memory. But for assistant coach Wyatt Collins, the next meet is just another step forward.

“We’re approaching each and every dual meet as a stepping stone to the Texas Hall of Fame Invitational and ultimately, the championship season,” Collins said. “(This meet) was an opportunity for us to see where we are in training and to work on executing a lot of the things we’ve been working on in practice. We’re going to approach Tennessee the same way.”

No. 5 Texas proved there is nothing to worry about with the commanding domination over the Aggies, and now the Longhorns will look to carry their momentum into Knoxville.

“Going to Tennessee, I’m actually really excited,” said Windle. “I love that pool, and I know all the divers there. I can’t wait to compete against them and hopefully we’ll pull out another win.”