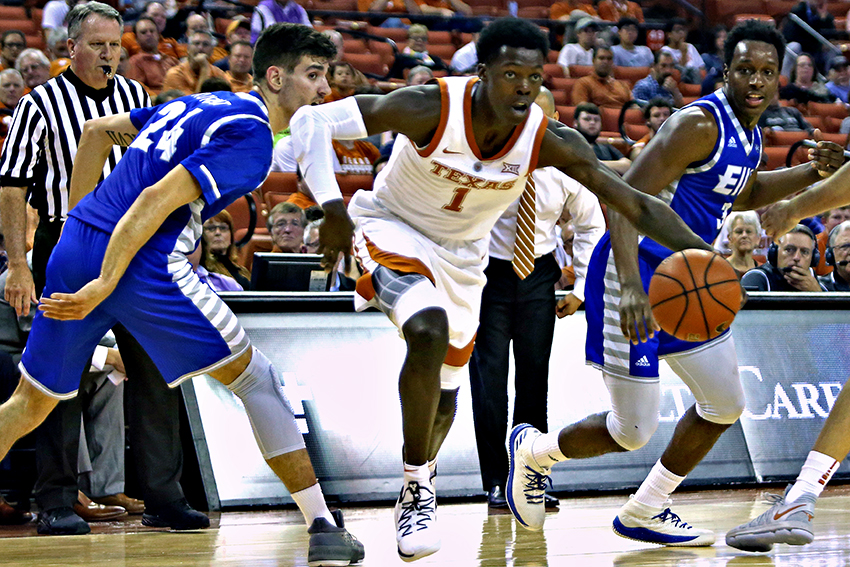 There was no first round NBA-talent center on the roster and Kerwin Roach II, one of his veteran players, sat out due to suspension. So, as opening night swept through the city of Austin, dozens of question marks surrounded the new look Texas squad and how it would function as a unit.

The beginning result was suboptimal at best, but in the end, all the pieces of Smart’s roster intertwined to deliver a convincing 71-59 win over Eastern Illinois.

“We played about 15 minutes of impressive basketball for Nov. 6,” Smart said. “I told the guys at shootaround that no matter what happens tonight, we’re going to have a lot of growth that we need to create.”

Eastern Illinois, fresh off a 12–19 finish in the Ohio Valley Conference, remained more than competitive for the first 16 minutes of the contest. Leading 25-23 with 3:50 left in the opening half, all Texas needed was a spark to explode offensively, and that spark was Elijah Mitrou-Long.

The transfer shooting guard drained a high-arcing corner three to break a 25-25 deadlock. To follow up the act, athletic freshman power forward Jaxson Hayes denied the Panthers on the other end with an emphatic rejection. The defensive stand transitioned into an and-one fast break layup by point guard Matt Coleman to secure a six-point lead.

“Me and the guards were talking about (the alley-oops) at the break,” Hayes said. “I looked at Matt, and after the first two ones he missed me on, I told him, ‘It’s open. It’s open.’ Or if they started helping off me, they’d have the guy in the corner to kick to.”

Several sequences later, Coleman lobbed it up to the high-flying Hayes for an exclamation point of an alley-oop to cap a 15-0 run. With players of all positions, skill sets and experience levels contributing, the game-defining run unleashed a new brand of Texas basketball that was absent in the season’s opening minutes.

“I thought our guys settled in, and we got the style of play going better as the half wore on,” Smart said. “I thought our guards did a really good job between Matt, Eli and Courtney (Ramey) managing the game, finding their teammates and getting the guys shots.”

Coleman, assuming a leadership role with the young team as a returning starter, pitched in a team-high 13 points to start his sophomore campaign. Additionally, he dished seven assists to exceptionally fulfill his role as the team’s assertive floor general.

The wealth was well distributed, manufacturing opportunities for other scorers. Sophomore shooting guard Jase Febres exploded in the second half with three triples of his own, while Hayes utilized his size advantage to dominate down low with 12 points.

But Smart saved his most applauded coaching decision of the night until there was 11:40 remaining in the second half. Andrew Jones checked into the contest for the first time since his leukemia diagnosis last January. Appreciative of the long journey back to the court, the Frank Erwin Center only exponentiated in volume when Jones sunk a free throw — his first point since New Year’s Day.

“He handled it very humbly,” Coleman said. “He wants to be treated like he’s one of us. He wants to have the same respect and show that he’s just as good as one of us. It felt good just having his presence. You see the fans, they care about him.”

With Jones back on the roster, the Longhorns aim to keep their young season perfect in El Paso this Friday against Arkansas.