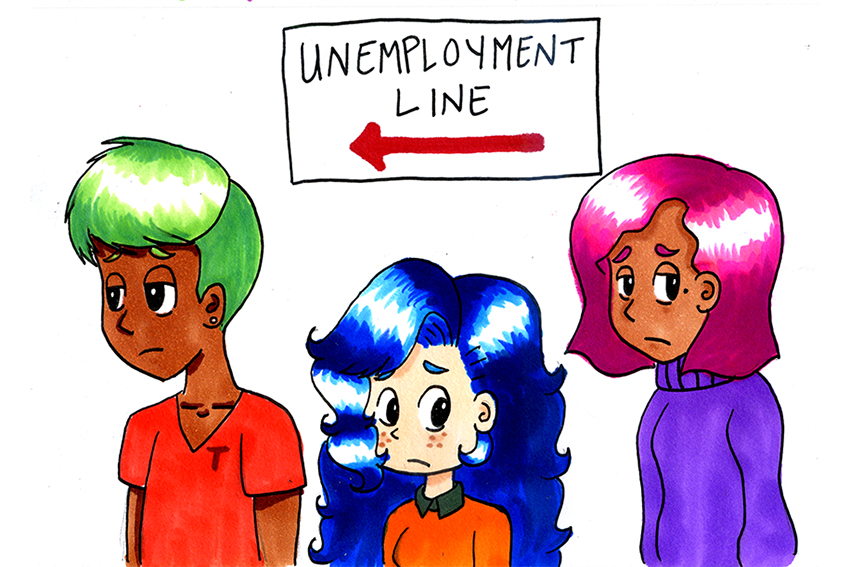 Journalism freshman Catherine Mouer’s hair has been bright blue since July. She said odd, disapproving looks from older adults are commonplace, as are excited points and stares from children.

Although Mouer said unnaturally colored hair is “one of the least weird things you could do in this city,” students with hues ranging from vivid violet to radiant red may have more difficulty finding a job in the professional field because of the stigma surrounding the look.

Daniel Hamermesh, a professor emeritus of economics, studies the importance of beauty and how it affects every dimension of economic activity. While he concedes there’s no specific research on the subject, Hamermesh said because dyed hair is unusual, it is unlikely to be a positive attribute in the mind of potential bosses.

“(Colored hair) makes one look weird, and most employers are not looking for that,” Hamermesh said. “They want someone who looks
fairly innocuous.”

Over time, as those who have dyed their hair unnatural colors in the past become hiring managers, Hamermesh said the stigma may change. But for now students should “go with (their) strengths or what people view as (their) strengths.”

“Stress the things that you’re good at,” Hamermesh said. “Look for a job in an occupation or with an employer who’s less bothered by this rather
strange appearance.”

While employers may see a link between a student’s ability to complete a job with their choice of hair color, Hamermesh said he thinks appearance has no effect on one’s ability to be successful in their field and hopes employers are able to look past cultural biases.

“If a student has a tremendous record and demonstrates hard work in other ways it will compensate,” Hamermesh said. “Unusual hair is just one negative of the many things employers care about.”

While interviewing for a volunteering position at a hospital in Lake Jackson, biochemistry freshman Madeline Lampe had the underside of her hair dyed to resemble the galaxy. While none of the staff members treated her differently, some patients or family members did not recognize her as a volunteer despite her uniform.

Lampe said she has accepted she won’t be able to have unnaturally dyed hair in her professional life and decided to dye her hair back to her natural color before looking for jobs in her future field. Although she acknowledges this, like Hamermesh, she sees no correlation in her dyed hair and her work ethic.

Mouer, who aspires to work with senators in places such as the Capitol, also decided freshman year was the time to experiment before searching for professional internships. She has accepted that her hair color may stand in the way of potential job opportunities, but that she hopes the industry will soon accept and celebrate
creative appearances.

“My hair doesn’t change the quality of my work or the lengths I will go to be successful in my career,” Mouer said. “The caliber of my work should be what defines my ability to be hired ­— not what color my hair is.”