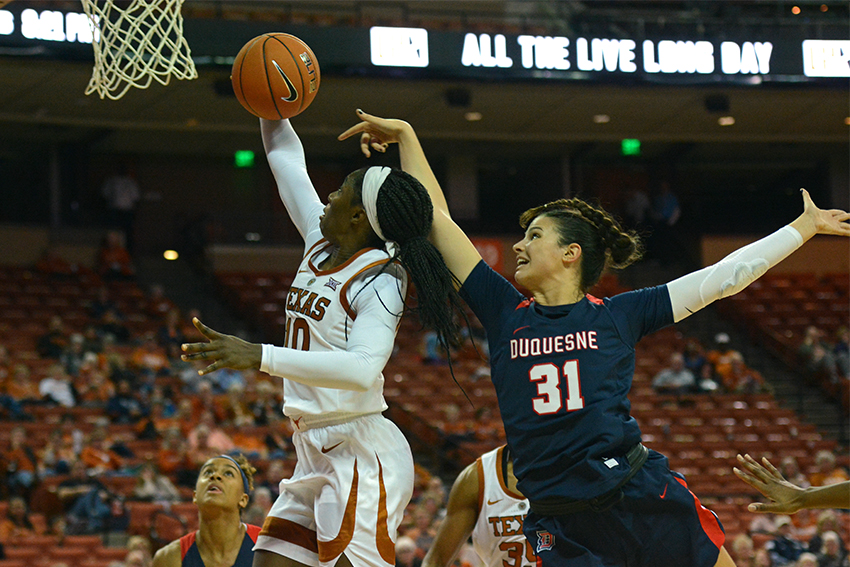 Before tip-off, the Longhorns were looking for two things: an improvement on defense and for Lashann Higgs to be their offensive force. They found both Thursday in a 78-41 win over Duquesne.

In the early stages of the game, offense was hard to come by for the Longhorns. Luckily for Texas, its defense picked up the slack. A swarming defense held the Dukes to seven points in the opening quarter, shooting 21 percent from the field.

“The biggest improvement in our team was our discipline,” head coach Karen Aston said after the game. “That’s a good team. That’s a NCAA Tournament team. We took them out of their offense completely in the first half.”

While the Longhorns struggled to generate points in the first half, Higgs carried the load offensively. She started the game only 36 points away from being the 44th player in school history to score 1,000 points in their career.

By the way she played from opening tip, it looked like she was going to get all 36 on Thursday. Higgs was aggressive early on, scoring seven of Texas’ first 13 points. In the second half, Higgs’ impressive performance continued as she finished with 20 points, bringing her closer to the 1,000-point milestone.

Higgs was dominant on the offensive end all night. However, the senior guard had the same mindset as her coach prior to tip-off.

“I was just trying to do whatever I (could) for my team,” Higgs said. “I tried to focus more on defense than offense. Right now, there’s a lot we need to work on.”

Once Higgs set the tone, Destiny Littleton followed her lead, setting a new career high in field goals, points and matching her career high in rebounds. The sharpshooter from California knocked down a corner three as soon as she checked into the game, bringing life to the offense.

Littleton’s shooting opened the game up for the Longhorns and helped extend their lead to 25 at the end of the first half.

In her freshman year, Littleton only scored 17 points all season. Now a sophomore, Littleton scored 15 in Thursday’s game. For her, the performance was a result of how hard she worked during the offseason.

“I had to ask myself what I wanted,” Littleton said. “I went back to what I knew. I grind, I grinded on a daily basis. I make my focus, whether I feel like practicing or not, (to be that) every rep matters.”

The breakout performance might’ve been surprising to some, but not to Aston.

“I would’ve been surprised had she not performed like that,” Aston said.

Led by its defense and scoring from both units, Texas was able to go home with a blowout victory to begin the season and momentum for the next matchup against North Texas on Monday.