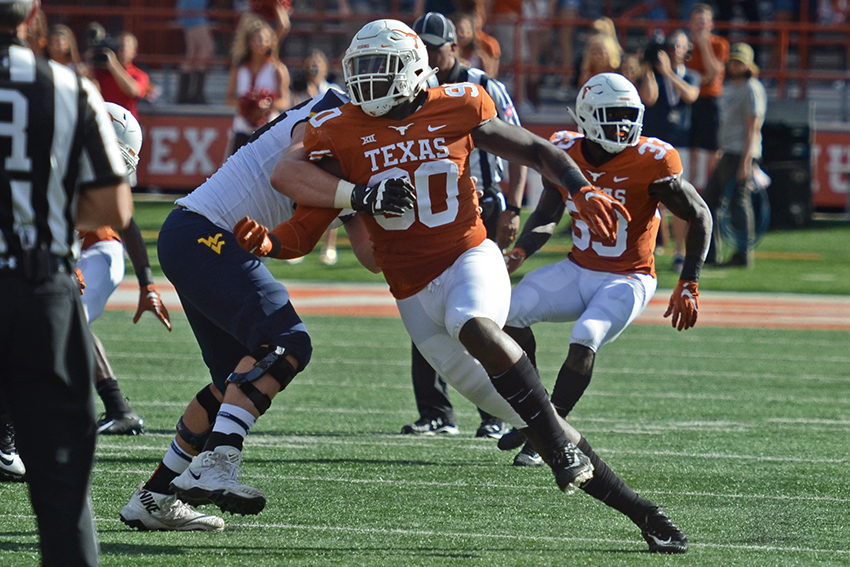 When the Longhorns make the 372-mile trip to Lubbock, they won’t experience anything they haven’t already encountered this season — except for the flying tortillas.

Texas Tech brings with it all of the characteristics of a true Big 12 team: a high-octane offense, a struggling defense and a hostile road environment. But once the lights flash on at Jones AT&T Stadium, Red Raider fans will start flinging tortillas the second the game kicks off. The long-running tradition in Lubbock dates back to the
late 1980s.

The hostile environment nearly helped Texas Tech upset No. 6 Oklahoma last Saturday. Now, one week later, both the Longhorns and Red Raiders look to maintain relevance in the conference by avoiding back-to-back-to-back losses.

As for the environment, veterans such as defensive end Charles Omenihu don’t anticipate being flustered by the ruckus crowd, or soaring tortillas.

“If that environment is going to make me cringe up then I’ve got problems,” Omenihu said. “… It’s going to be a night game, cool. It’s a big game, yeah. It’s another game we have to win. If you’re too worried about tortillas and environment and whatever the hell else they’re going to be doing, then you’re wasting your time.”

While Texas players say they won’t be affected by the environment, or the tortillas, the Longhorns will definitely be phased by one thing: the horns down gesture.

Week in and week out, every team does it, and Saturday won’t be any different. The latest installment featured West Virginia quarterback and Heisman candidate Will Grier when he flashed the upside down symbol in front of the Longhorn faithful at Darrell K Royal-Texas Memorial Stadium last Saturday.

After the game, a small altercation broke out between the teams when West Virginia players celebrated on the Longhorn logo at midfield. Texas players, who usually remain silent on the topic, finally sounded off.

“We don’t disrespect any other schools by throwing their signs down or anything like that,” wide receiver Lil’Jordan Humphrey said. “It bothers us a lot because we take pride in what we do for that logo. For schools to disrespect us for no reason, it really pisses me and a lot of guys off. I guess that’s what comes with it when you’re a top-tier program and people don’t like you.”

After Texas’ one-point loss to the Mountaineers, Sam Ehlinger tweeted out, “I remember every single team/player that disrespects the rich tradition of the University of Texas by putting the Horns down. Do not think it will be forgotten in the future.”

Ehlinger later took the tweet down and noted his frustrations weren’t geared toward a specific player or his friend, West Virginia wide receiver David Sills V, who was penalized 15 yards for throwing the horns down during last Saturday’s game.

“It has nothing to do with individual players,” Ehlinger said. “It’s just something that if we take care of our business, then we can limit people doing that.”

Texas has struggled to limit that gesture after giving up a combined 80 points and dropping back-to-back last-second victories in the last two weeks. Now, the Longhorns face a must-win situation with the final sliver of their Big 12 title hopes riding on this matchup
in Lubbock.

The Longhorns and Red Raiders are set to kickoff in Lubbock at 6:30 p.m.