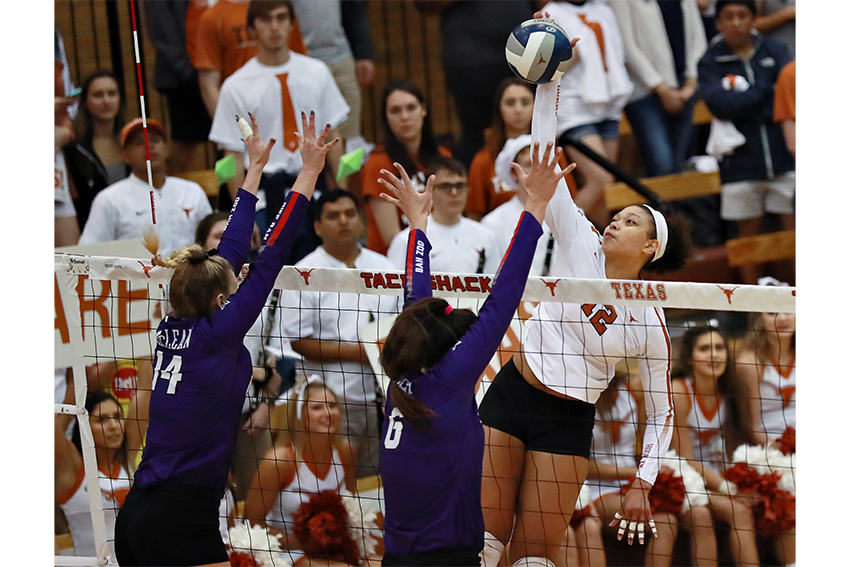 Teams usually have it figured out by now.

The signs, the mechanics, the atmosphere. Most good teams have found their identity and are running with it into the postseason.

For No. 5 Texas, all that needs to be done is dotting some I’s and crossing some T’s. Saturday’s game against Kansas showed fans and opponents alike how the Longhorns’ new adjustments fared with its tried and tested rotation, and it returned yet another positive result: a seventh straight win.

“Obviously we had a little chip on our shoulder from the last time we played them,” middle blocker Morgan Johnson said. “You could just see the focus and determination that we had. The fire that we had.”

For a good part of the game, Texas had its attack firing on all cylinders. Part of this tried and tested rotation, outside hitters Micaya White and Yaasmeen Bedart-Ghani, went on to combine for 10 kills in the first frame to get the Longhorns off to a hot start.

On the other side of this new attack was the new adjustment. Setter Jhenna Gabriel made her third straight appearance in which she garnered a majority of the playing time. Despite her fellow setter Ashley Shook handling sets this season until this point, there hasn’t been much of a difference in the on-court performance.

“We all practice (together) switching them (the setters) out,” libero Sydney Petersen said. “(Jhenna) brings a lot more energy, and we need that right now.”

Kansas, as it did last time around, didn’t let up. The Jayhawks matched Texas swing-for-swing in the second frame and did exactly what the Longhorns did to build a lead. A combination of strong attacks and just catching Texas off guard put them over the top to knot up the match.

But as it has happened all season, the old and the new fused together for Texas and found itself another pair of wins in the next two sets, giving the Longhorns at least partial share of the Big 12 regular season title. But for Texas, there’s still a lot of work left to do.

“Our block tempo wasn’t very good,” head coach Jerritt Elliott said. “We know it’s an area that we got to spend a lot more time on and get better.”

As this season has shown already, Texas knows where to find its issues and how to fix them. Coaches found a fix to Texas’ service errors, something that plagued them earlier in the season. But with the blocking issues the Longhorns had on Saturday — Kansas outblocked Texas 10-5 — the staff will have to go back to the drawing board.

And with just three games remaining on the schedule, Texas will have to do something it’s had trouble with all season: playing well on the road. Despite racking up 12 wins in conference play, the Longhorns got out of most of their matches in a lot of closer-than-it-should-have-been games, and they still have a couple of tough games remaining on the docket.

“You have the tournament in sight now and it’s giving us more motivation,” Johnson said. “We see what we’re playing for … and it’s just lighting a fire under us.”

With the postseason just around the corner, the push for a conference title and the case for a top-four seed will continue. Next up, Texas will take the trip up I-35 to face Baylor on Friday, Nov. 16. First serve is set for 6 p.m.