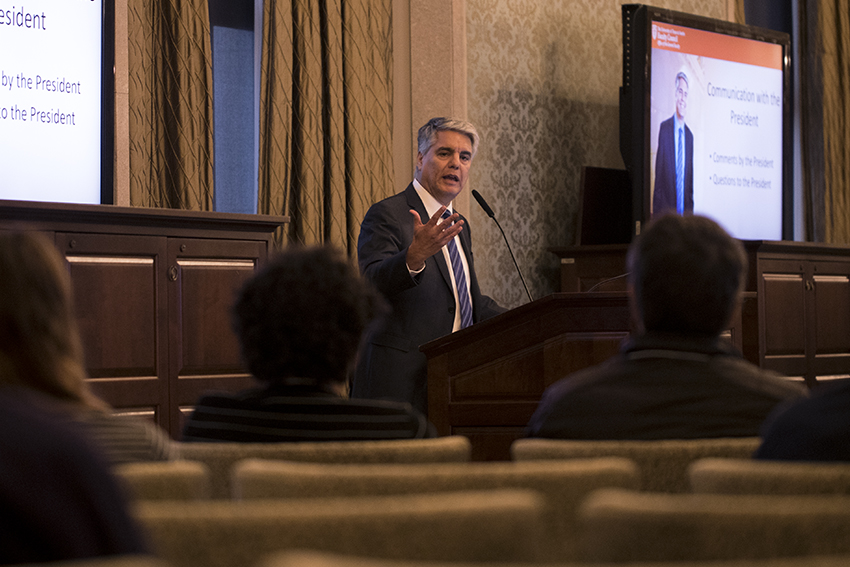 Although the last of South Mall’s Confederate statues were removed in August 2017, the statue of former Texas governor James Hogg will return to campus, President Gregory Fenves announced Monday.

“He has an important history in Texas … but like many leaders of that era, has a mixed record on segregation,” Fenves said. “That is part of the history of this state and this country that we have to understand better.”

The Hogg statue will be reinstalled on the east side of the Main Building facing the Will C. Hogg Building, named after his son, by the end of the year, Fenves said. The statue of Hogg was not removed because of ideological objections, but because of its part in the greater exhibit on South Mall, UT spokesperson J.B. Bird told The New York Times in 2017. The University has planned to relocate it on campus since.

James Hogg’s four children created the Hogg Foundation for Mental Health and were prominent donors to the University.

The University removed a statue of former Confederate president Jefferson Davis, along with a statue of former U.S. President Woodrow Wilson, from the Main Mall after white supremacist Dylann Roof opened fire on a predominantly black church in Charleston, SC, in 2015. Like Hogg, Wilson was removed for aesthetic reasons to preserve the symmetry of the display on the Main Mall.

The three remaining Confederate statues along the South Mall were relocated to the Dolph Briscoe Center for American History two years later. The statue of Hogg was removed simultaneously.

The removal came after a deadly demonstration at the University of Virginia, where a group of white supremacists protested the removal of a monument of Confederate general Robert E. Lee.

“I think about all the students of color and black students who have to pass by these statues every day, and I’m proud that they are down now,” former student body president Alejandrina Guzman told The Daily Texan in 2017.

A committee of students and faculty is brainstorming how to contextualize the statues and plinths remaining on South Mall, student body vice president Mehraz Rahman said.

“We really wanted to make sure the students would know why this is happening,” said Rahman, a Plan II and marketing senior.