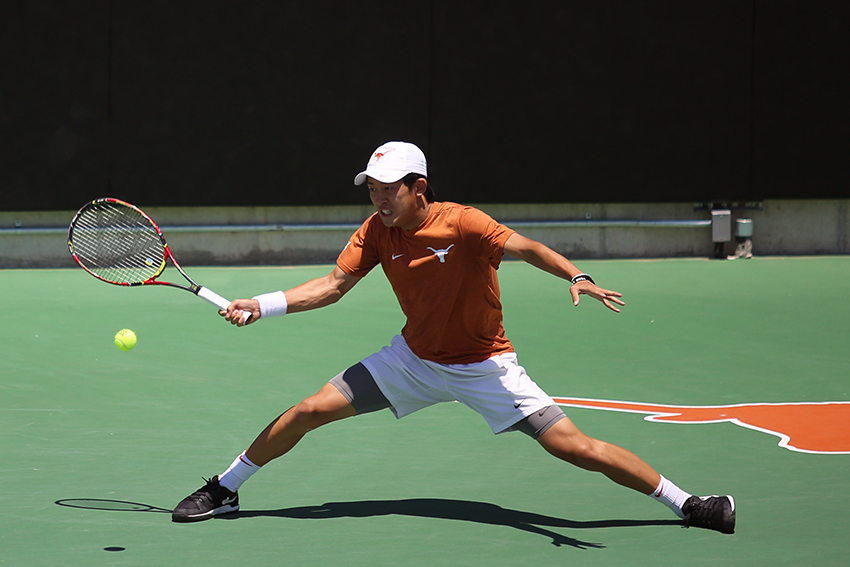 Texas men’s tennis concluded its national fall competitions at the Oracle ITA National Fall Championships this past weekend in Surprise, Arizona. Competing in the tournament were Yuya Ito, Christian Sigsgaard and senior Harrison Scott. During the event, Scott was bounced out early in both his singles and doubles match play, where he was paired up with teammate Sigsgaard.

Ito had a strong start to his singles draw with consecutive wins over strong competition. Unfortunately for Ito, he had to pull out of his round of 16 match against Virginia Tech’s Jason Kros due to some injuries.

“I was (a) little concerned with Yuya coming home with an injury,” head coach Michael Center said. “Sometimes we play so much in the fall, and we want to be healthy in January, so we’ll use this time to get him healthy. He played two terrific matches before he got hurt and won pretty comfortably, so he was playing well.”

Sigsgaard made it the farthest out of any UT competitor. He started his match playoff Friday with an impressive win over Tulane’s Luis Erlenbusch (7-5, 4-6, 6-4) in the round of 16 before dropping his quarterfinals match to UC Santa Barbara’s Nicolas Moreno de Alboran (6-4,6-3).

“It was a great trip,” Sigsgaard said. “Everyone out there was good. We knew we were going to get some tough matches, but I think we did well. I won three tough matches and then lost a tough one against a guy I played three times this fall, so a lot of my fall was spent playing him.”

Sigsgaard had the strongest fall session on the team, with impressive finishes and wins at the ITA All-Americans and Regionals, respectively. Sigsgaard said he was worried going into fall play due to an injury he suffered during the summer, but feels confident heading into league competition.

“I think I really found how to play my game this fall,” Sigsgaard said. “So I’m going to continue to try to do that during the offseason and just try to work on my fitness and getting ready for the actual season.”

Center was pleased with what he saw during the fall and believes that their play will translate well against their league competition.

“I think we got what we wanted,” Center said. “We played a lot. The guys were tested and challenged. We worked on our doubles, and I feel like we’ve improved in that area.”