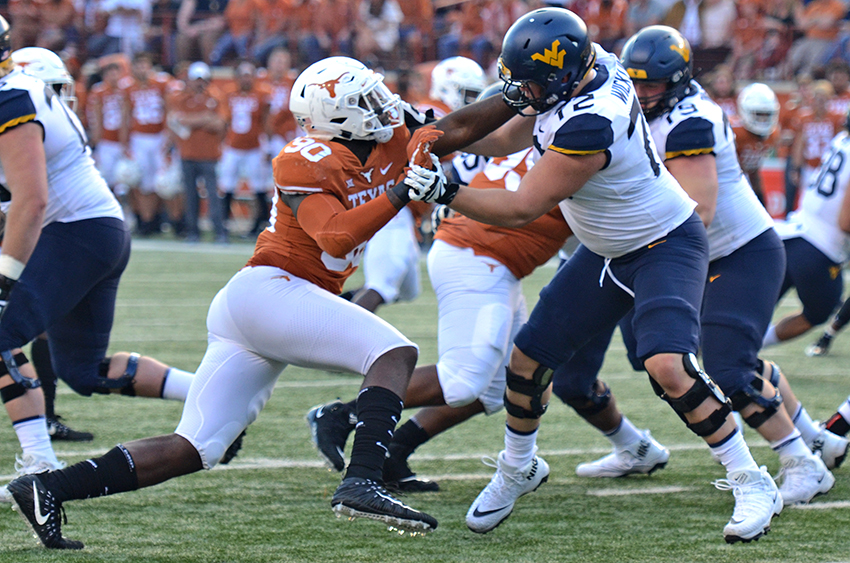 When Texas’ seniors first arrived in Austin at the beginning of their freshman year, they knew they wanted to get Texas back to national prominence.

The program, which was four years removed from their national title appearance against Alabama in 2010, watched Nick Saban build his dynasty while they limped to a mediocre 6–7 record in 2014.

But while the recruiting classes of 2014 and 2015 attempted to help turn the program around, back-to-back 5–7 records in 2015 and 2016 forced Charlie Strong out of Austin before they even became upperclassmen.

“It was crazy, man. I won’t regret nothing, but I’m glad we’re not there,” fifth-year senior defensive tackle Chris Nelson said. “I wouldn’t do it over again.”

While seniors are willing to reflect on the trials and tribulations of the program from the past five years, it’s the fifth-year seniors like Chris Nelson, Elijah Rodriguez, Jerrod Heard and Andrew Beck who have endured the most.

“We talk about it all the time, we just sit back and laugh about it in the locker room now,” Nelson said. “It was some tough times.”

Now that Texas sits at a 7–3 record, the seniors are finally able to look back at those “tough times” as learning moments rather than playing through another excruciating 5–7 season.

Until this season, Texas struggled to close out games for the majority of the decade, which clearly defined the Longhorns’ season for the past four years.

Despite dropping three games by a combined nine points, the Longhorns are also collecting their fair share of close-game victories, including five wins by a touchdown or less.

According to defensive end Charles Omenihu, the improved record can partly be attributed to two characteristics: attitude and confidence.

“We’ve got a lot of swagger,” Omenihu said. “You see it in Sam (Ehlinger), bobbing his head to the music before a snap. You see it with LJ (Humphrey) catching the ball and just staring at a guy, like, ‘What’s up?’ You see it with me doing home run swings, staring people down. It’s just an attitude.”

With Saturday marking Texas’ senior night, 26 players will be honored while knowing they have already secured the best record in the last five seasons.

And while emotions will be running high, the Longhorns will have more than senior night to motivate them. With two games remaining, including the matchup with No. 16 Iowa State this Saturday night, the Longhorns still find themselves in the hunt for a conference championship for the first time since 2009. And while 7–3 is a drastic improvement from recent seasons, the seniors are still looking to earn a Big 12 title for the first time in the Tom Herman era.

“These guys are fully aware of what this team is capable of doing because they have seen what the other teams that they have been on have been like, and the culture in that locker room, and they know the potential of this team,” Herman said. “And I think they’re hell-bent on making sure that this team achieves its potential.”