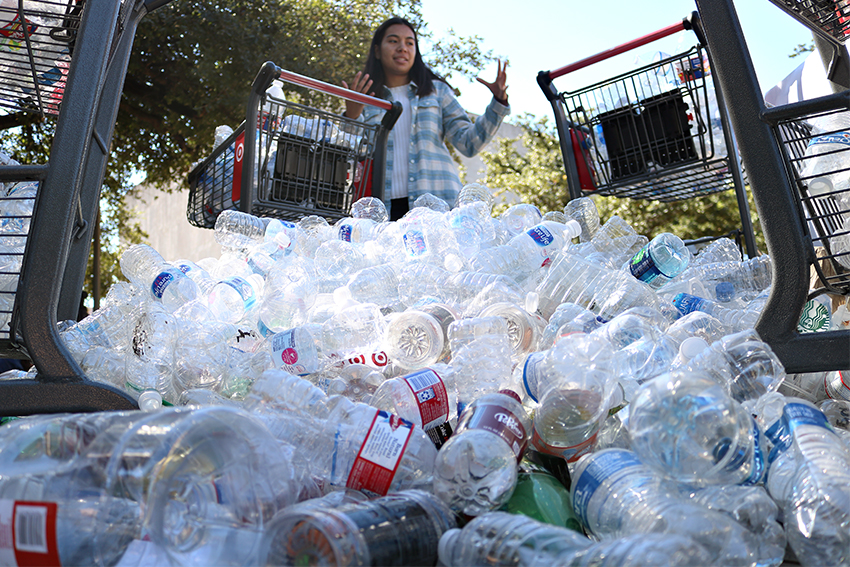 Plastic water bottles overflow shopping carts and spill onto the ground in front of Jester Plaza. As students pass by the demonstration, some stop and ask questions, while others stare at the massive pile in awe.

For three hours on Wednesday, Nov. 14, over 2,000 plastic water bottles were haphazardly thrown into a pile. Coordinated by members of the Social Entrepreneurship Learning Lab Fellowship, a program that encourages students to critically examine social issues, the demonstration served to represent the plastic problem on campus and call attention to the need
for change.

Alyson Vargas, communication and leadership and sustainability studies sophomore, said she began organizing the event to bring attention to the dramatic amounts of single-use plastic on campus.

The team made up of four fellows, Alyson Vargas, Luisa Vargas, Rachel Schlesinger and Alexander Street, and their classmate Mia Koern, spent a week collecting plastic water bottles. Alyson said they were shocked to see the amount of bottles that were placed incorrectly all
around campus.

“UT attempting to reach the goal of reducing its waste dramatically by 2020 seems like an out of touch subject among students,” Alyson said. “A core problem that students face is that they are not aware of the impact their purchasing patterns have on the environment.”

The original goal of the demonstration was to construct a tower out of the bottles they collected, but after the group had structural difficulties, Alyson said the “mess” was more representative of the problem itself.

“Next semester, I hope to work with students whose focus is on sculptures and make it possible to create a 4D model of the tower,” Alyson said. “Moving forward, with time and planning I see this sort of event being campus wide.”

Despite the tower’s absence, Luisa, communication and leadership sophomore and co-coordinator for the event, said the focus remains on trying to connect students’ consumption of plastic with pollution.

“It’s frustrating to see that the brightest and most innovative students in Texas don’t see single-use plastic as an issue,” Luisa said. “We’re told that ‘What starts here changes the world,’ and what we’re trying to do, as a matter of fact, would change the world.”

While the impact may be harder to measure because of a lack of quantitative data, the Zero Waste initiative senior coordinator McKenzie Beverage said that the uniqueness of the demonstration is likely to catch students’ eyes.

“You’re not going to get the attention of the whole university,” Beverage said. “(But) as long as you can spark a thought there’s potential to have great impact.”

Koern, public relations sophomore and Alyson’s classmate, was recruited for the event because of her shared passion for making a change for this problem.

“Climate change and the way humans affect the earth is a detrimental problem that has been shaped into a partisan issue,” Koern said. “It’s an issue for every single, solitary person.”

Alyson said if the event changes the mindset of one student, then it will be a success.

“It is important that we try to educate students and help them ease into a greener lifestyle, rather than pushing them away or reinforcing the stigma that only environmentalists need to be caring about the Earth,” Alyson said.