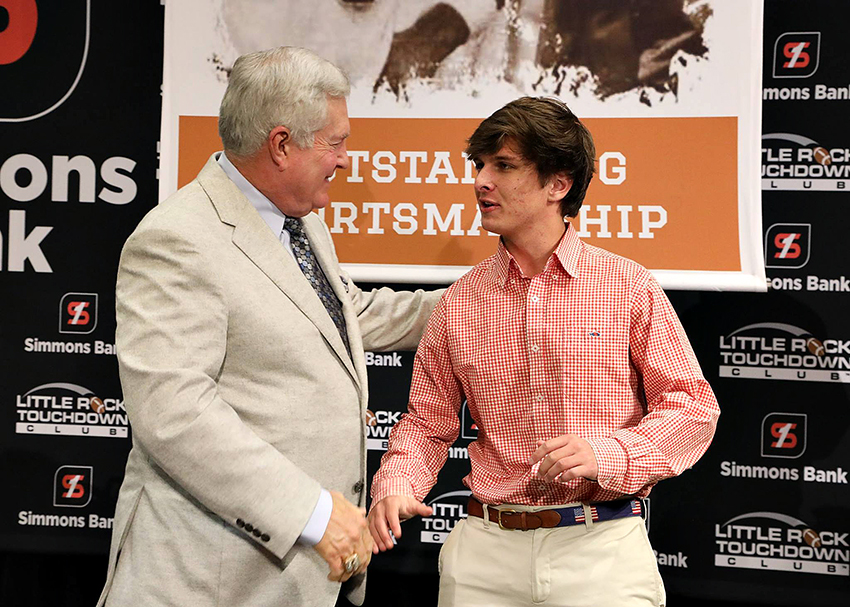 Many Texas football fans are fully aware of the contributions brought to the program by recent quarterbacks Vince Young and Colt McCoy. However, others aren’t as knowledgeable of the impact left long ago by James Street, the Longhorns’ winningest quarterback in school history.

Among those unknowing of Street’s name was a group of 14 high school football players in Little Rock, Arkansas, who were chosen to carry on his legacy after being honored with the annual James Street Sportsmanship Award on Monday.

Created in 2013 by David Bazzel and Bruce James, two former Arkansas Razorback players and founders of the Little Rock Touchdown Club, the Street Award finalists are nominated by Little Rock high school football coaches based on their character on and off the field, rather than skill.

It’s an unusual sight for a Longhorn athlete like Street to be honored in a ballroom over 500 miles away from Austin with 400 people in attendance consisting mainly of former players, coaches and fans that primarily cheer for the Razorbacks on Saturday afternoons.

The relationship involving Street and the Razorbacks spawns from a 1969 matchup in which Texas defeated Arkansas, 15-14, in a game that heavily built the Longhorns’ case as national champions and is still commonly referred to as the “Game of the Century.”

The former quarterback spoke in Arkansas during 2013 at a showing for a documentary of the famed 1969 clash in which he received a standing ovation from the many Razorback fans in attendance — a reaction Street never expected.

“They never really got over (the loss), so James came up and spoke to this group and basically said, ‘You guys were as good as us,’” said Ted Koy, a former Texas running back who played alongside Street. “It was such an emotional response.”

Twenty-five days after his appearance at the event, Street passed away unexpectedly.

Bazzel and James then created the sportsmanship award in Street’s honor after he made a strong impression on many Razorbacks who had long held grudges over the 1969 matchup.

“It’s very unique that we’re honoring somebody that we used to hate at Texas,” Bazzel said.

Former Texas head coach Mack Brown, who was in attendance as the event’s keynote speaker, said the criteria for the award perfectly embodies the type of person Street was.

“This is not about just the best player, it’s about the best kid and their accomplishments and that’s who James was,” Brown said. “James was passionate, he loved life, he was crazy. If he was here today, he’d be loud and it’d be fun and he’d be picking on all of you and telling jokes. But he also cared about what was right. And he is smiling in heaven over this.”

Bazzel announced during the event that all 14 finalists would be chosen as award winners — something the organization hasn’t done in previous years. Each winner received a plaque, $500 and split the remaining $1,000 award typically given to the sole winner.

Among the winners was Henry Brooks V, a senior at Little Rock’s J.A. Fair High School, whose expectations for the event were exceeded upon arriving at the ceremony.

“Wow, this a big deal,” Brooks said. “They told me it was a big deal, but you know how people exaggerate things. I didn’t really think it was (going to be) a big deal.”

Episcopal Collegiate School’s Boyd Bethel was also named an award winner for his role on the school’s eight-man football team. Despite having no prior knowledge of Street’s legacy at the University of Texas, Bethel said he felt honored to have been recognized for the award after hearing many of Street’s peers speak in such high regard of him.

“Just hearing Street’s story and all the praise for him and how good of a guy he was, it’s definitely an honor to win an award named for him,” Bethel said. “Just to be in that company alone is a great honor.”