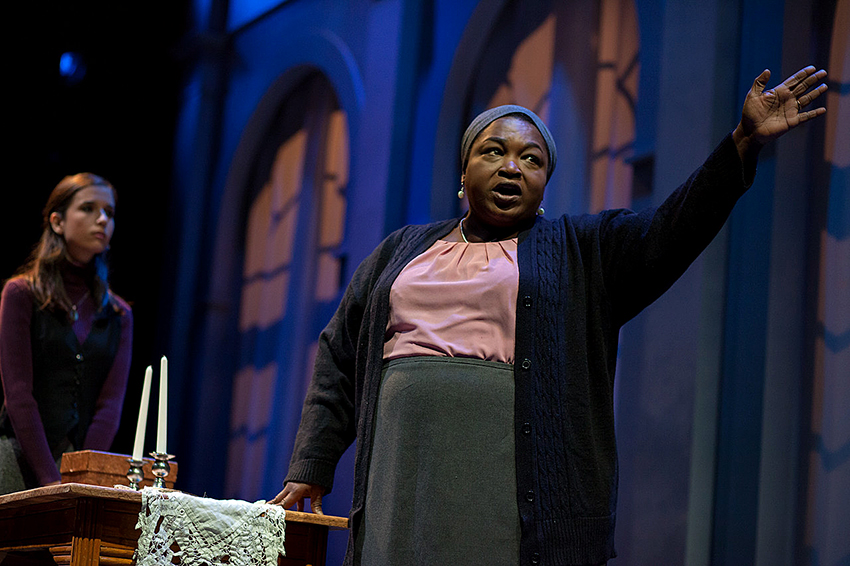 What does it take to fix Shakespeare’s “Merchant of Venice”? To UT’s Theatre and Dance department, it’s a simple
gender swap.

Contrary to the play’s conventional interpretation, UT’s rendition of the “Merchant of Venice” has the antagonist, Shylock, gender swapped to a businesswoman. This change was made in order to alter the audience’s perception of the antagonist. The production will run from Nov. 15 to Dec. 2 at the Oscar G. Brockett Theatre.

Adam Sussman, play director and directing graduate student, wanted to change the way people view Shylock. The idea of having Shylock portrayed as a woman instead of a man came to him as he watched coverage of the 2016 election in which Hillary Clinton became the first woman nominated for president by the Democratic Party.

“In this production, Shylock is a very shrewd businesswoman — thinking about this character as a mother, as a pillar of her community who is trying to do what is best for her business, her family and her community,” Sussman said.

The play has received criticism in the past because it features a Jewish character named Shylock who is often portrayed as stereotypically greedy. Aaron Moore, theatre and dance sophomore, who is acting the role of Gratiano has seen many interpretations of “Merchant of Venice.”

“You can make (the play) very anti-Semitic as people have done in the past, but we’re not doing that,”  Moore said.

“While there are many elements of Shylock that I myself have a very difficult time with, (as a) Jewish theatre major, there is something deeply human and dimensional about Shylock that I find intriguing,”
Sussman said.

There are many debates about how much directors are allowed to change Shakespeare’s plays — with some arguing for very strict interpretations of the text. Sussman said he is more open to interpretation and allowing the works to evolve with the times while still keeping true to the original ideas.

“The challenge we have as artists doing Shakespeare in the 21st century is trying to make the work as relevant and fresh as possible, but also making it as rich as possible — if I had done it how Shakespeare probably wanted it, there would be no women at all, which I don’t think anyone wants,”
Sussman said.

Gender swapping characters is not unheard of in past productions of Shakespeare’s plays. James Loehlin, English professor and Shakespeare at Winedale program director, has seen plenty of different renditions of the plays with varied takes on the subject matters.

“I’m interested to see (the gender swap),” Loehlin said. “It can have some powerful results, and I think it’s certainly within the realm of interpretive tools that directors have to work with.”