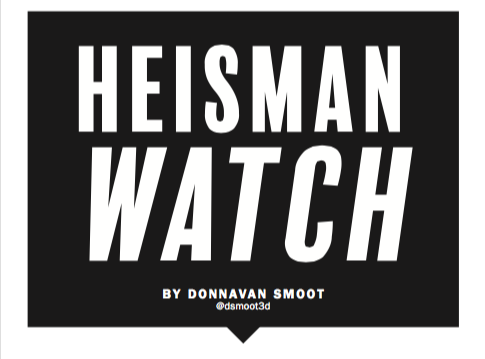 The Heisman Trophy race is calming down with the top two spots occupied by surefire candidates. Nonetheless, every player in the race is still polarizing week in and week out. Here’s how they are performing:

For the first time all season, Tagovailoa looked mediocre. He only had one touchdown against then-No. 16 Mississippi State. The game was the second time this season Tagovailoa had less than 150 total yards. Granted, the last time he had less than 150 yards was against UL-Lafayette when he still went 8-for-8 with 128 yards and two touchdowns before sitting out the second half due to a 49-0 lead. Even without a stellar game on Saturday, Alabama’s strength was enough to pitch a shutout against their SEC rival.

Murray was involved in absolute Bedlam last weekend. He and the Sooners found themselves in another shootout, narrowly escaping with a one-point victory against Oklahoma State. Murray had 349 yards passing with a completion rate of just over 72 percent. Murray’s calling card this season has been his accuracy. He’s been a tactical surgeon in Oklahoma’s explosive offense. Right now, Oklahoma is ranked No. 6 in the nation. Murray is making the Sooners a playoff contender and has masked their flaws on the defensive side of the ball. While he is second in most polls, his best argument for the Heisman is that his team isn’t as strong
as Tagovailoa’s.

The Sooners have a home matchup against Kansas before heading to Morgantown to face fellow Heisman candidate Will Grier. The final week will be the prequel to what will most likely be a Big 12 title matchup. The final two games will be an incredible opportunity for Murray to leave a memorable impression on the playoff committee and Heisman voters.

#7 Will Grier, quarterback, No. 9 West Virginia

After pulling off a season-saving, game-winning drive against Texas, Will Grier and the Mountaineers faced off against a disappointing TCU team. Grier threw for 343 yards and three touchdowns to go along with one interception. It’s obvious at this point in the season that Grier is one of the three best quarterbacks in the country. Grier has an important two weeks ahead of him.

This Saturday, he has to be on his A-game when the Mountaineers face the Oklahoma State Cowboys, who are capable of putting any team on upset alert. Following that matchup, Grier will face off against Kyler Murray, the other Heisman candidate in the conference. With bragging rights, a regular season title and a place in the Big 12 championship game on the line, the next two weeks are critical for Grier’s season.