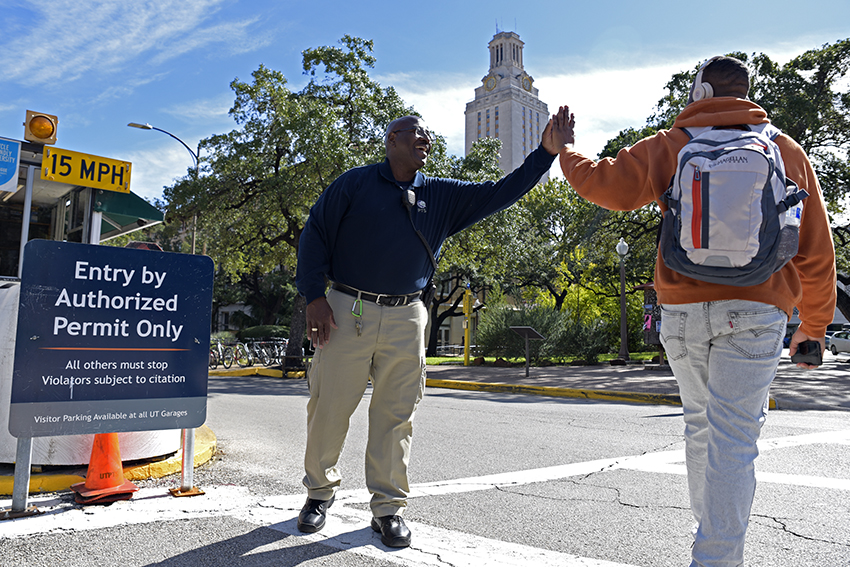 At the intersection of 24th Street and Whitis Avenue, not even the melodious chimes of the Tower bells, the honks of passing vehicles or the chatter of rushing students can drown out Michael Shaw’s booming voice.

Shaw, UT Empowerment Program Ambassador and Parking Enforcement Assistant, adds to his daily traffic regulation routine through high-fives, words of motivation and friendly conversations with passersby. At various traffic kiosks across campus, Shaw has channeled positivity into his work since 2011.

The traffic director’s efforts to increase student engagement began around 2013, as he noticed countless passing students with “mummified” looks on their faces. What started as a few unreciprocated greetings evolved into a mutual relationship with the student body.

“I watched this for almost a year without interacting — just trying to figure out how to interact,” Shaw said. “I eventually had to break the ice in order for them to understand that, you know what? Maybe this guy isn’t so bad.”

But for Shaw, breaking the ice holds deeper meaning. In addition to adding positivity to their stress-filled schedules, Shaw said his friendly routine also functions to maintain student awareness and safety.

“Students now are in that zone every morning when they get up and they forget about the outside world,” Shaw said. “What I try to do is engage them so they can wake up and be like, ‘Okay, time for school. It’s time to be alert.”

Students such as Allison Runas, electrical and computer engineering senior, have encountered Shaw multiple times on campus. When recalling an interaction between Shaw and a
scooter-user on 21st Street, Runas said he stands apart from other employees by maintaining his kind demeanor while correcting traffic violations.

“Not only (does Shaw try) to make everybody smile, but when he does his job, he’s not trying to make you feel like a terrible person,” Runas said.

Shaw’s actions also impact fellow members of Parking and Transportation, including administrative associate Marcy Drapes. In the five years she’s worked with him for their Employee Engagement Focus Group, she said Shaw encourages her to think about both sides of a given situation.

“(Shaw always) pokes his head in with a positive message,” Drapes said. “Something as corny as ‘Today’s a great day’ or ‘Choose to have a great day’ — it’s amazing how something that little can help you through the day.”

But behind Shaw’s optimism lies some personal hardships. A knee injury forced him to resign from his 11-year job as a police officer, and more recently, he’s lost two relatives within the span of three months. Through these events, Shaw said he’s learned to appreciate life.

“Life is sometimes too precious that we look past being given that opportunity to go through another day,” Shaw said. “Every day is an opportunity for you to shine, so share it with
someone else.”

Shaw also wishes for the light to shine on other members of Parking and Transportation Services. He said he hopes students, faculty and media alike will recognize his coworkers for their work.

“(Members of Parking and Transportation) all engage with the students, but we all engage on different levels,” Shaw said. “We have some people that are quiet, but their energy is just as good as (mine).”

The ambassador derives some of this energy from the 40 Acres. Unlike the various jobs he’s worked before, Shaw said his position allows him to influence others while remaining true to himself.

“UT has really taken the opportunity to recognize the things I’ve done,” Shaw said. “It’s just fortunate that I’ve been able to catch the right eye and engage the right person that it has gone above and beyond any of my expectations. My department gives me that leeway, and as long as they give it to me, I’m going to take it and enjoy it.”