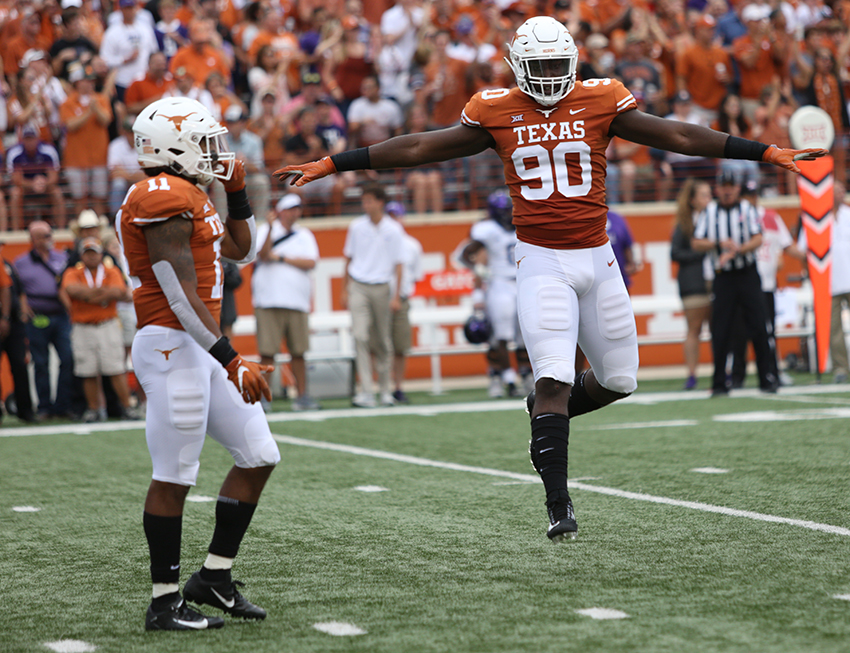 Texas fans shouldn’t be surprised when they’re biting their fingernails during every fourth quarter. In fact, they should be expecting it by now.

The Longhorns’ last six games — and eight total this season — have been decided by just one score, and many of them haven’t gone final until the closing moments.

With a seemingly identical game flow happening so many weeks in a row, having the mentality of a team that’s always involved in close games is something the Longhorns have begun to embrace.

“I think it’s a dose of reality to where we know that this is who we are. We’re overachievers at this point,” head coach Tom Herman said. “Every game is going to be close, especially in this conference. You want to talk about parity, this conference is unbelievable.”

The Big 12 has been especially even this season, with four teams still in the running for a spot in December’s conference title game. Two of those teams still fighting for a chance in the race are none other than Texas and Iowa State, who are set to square off in Austin on Saturday.

Texas set itself up for the high stakes, No. 15-versus-No. 16 matchup by holding off a surging Texas Tech comeback attempt in the closing minutes of last weekend’s game in Lubbock. With the Longhorns’ season on the line, quarterback Sam Ehlinger set up wide receiver Lil’Jordan Humphrey for a game-winning touchdown grab to secure the win after blowing a three-possession lead.

“This team, they know that we’re never out of it, but they’ve also realized we’ve got to learn how to close the door a little bit when we have 17-point leads ourselves,” Herman said.

Texas’ trademark theatrics have become a common occurrence for the program since Herman took over as coach. But with those exciting finishes comes a less-thrilling question: Why have the Longhorns consistently been unable to put teams away before giving them an extra chance?

Many players simply chalk it up to the extra effort other teams give when they see the word “Texas” on the schedule that week.

Others are more puzzled as to why the Longhorns can’t shut the door when it matters most.

“Man, I have no clue. Me and (Malcolm) Roach are on the sideline like, ‘We just can’t end the game,’” defensive tackle Chris Nelson said. “I have no clue what it is, but I’m glad we pulled it off (against Texas Tech).”

Whatever the reasoning may be, the narrative isn’t likely to change as the Longhorns engage in another matchup against a ranked opponent on Saturday, their fifth of the season. If it leaves with a win against the Cyclones, Texas survives and advances once again in its pursuit of reaching the Big 12 Championship. But with a loss, its chances will vanish.