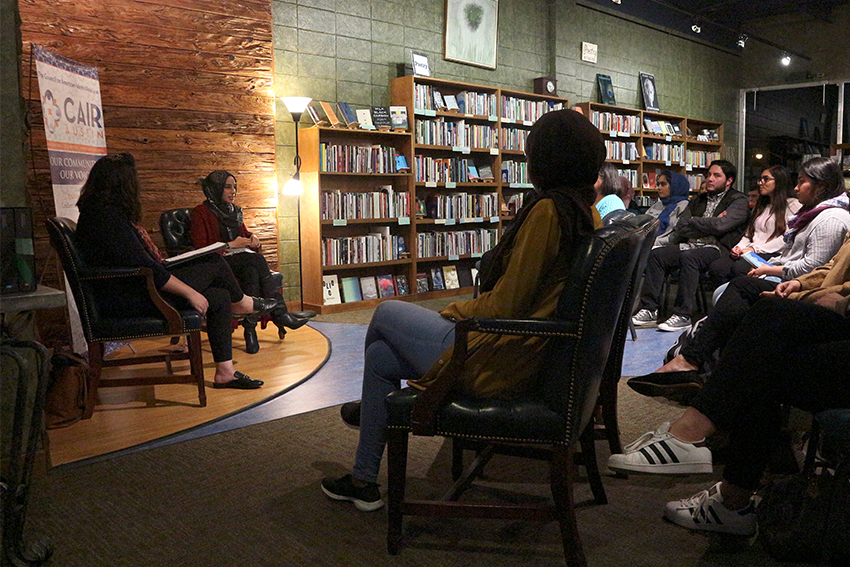 In the dim light of local bookstore Malvern Books, UT-Austin alumna Sara Bawany uttered a quick prayer before reading a poem from her newly published book of poetry and prose, “(w)holehearted.”

After reading one poem, Bawany told the crowd of about 20 people that the poem represented the fear she felt after the 2016 general election as a Muslim woman of color who wore a hijab.

“It was kind of my way of reassuring myself through all the fear I felt,” Bawany said. “Unfortunately, it seems like history is always repeating itself as much as we pretend it won’t, but there is always some good that we can try to find in ourselves and put out in the world as much as we can.”

The reading and book launch was hosted by Austin’s branch of the Council on American-Islamic Relations, a national civil rights organization.

Maira Sheikh, executive director of CAIR’s Austin branch, said the event was part of CAIR’s efforts to give a platform to diverse voices from Muslim communities.

“I wanted to create opportunities for people to understand that the Muslim identity is a dynamic one,” Sheikh said. “You have people that are authors, that are athletes, you have all kinds of different representation from this religious group and we’re not some sort of uniform identity.”

Social worker Bawany said she began actively writing at 15 years old because it was a good coping mechanism for struggles she faced. After she began sharing her poetry she said she realized how many
people related to her.

“That’s when I realized that by writing this stuff out, I was helping people feel less alone,” Bawany said. “And that made it so much bigger than me, which is why I wanted to share it.”

“(w)holehearted” contains poetry about a variety of topics such as spirituality, mental health, feminism and domestic violence. Bawany said while a lot of her poems tie into her identity as a Pakistani-American, Muslim woman, they are not targeted toward a specific identity.

“She talks about many taboo subjects or subjects that are uncomfortable to talk about in the Muslim community for sure,” N’Diaye said. “It’s kind of refreshing because as a Muslim person it’s like, ‘It’s okay if I feel this way, I’m not alone.’”