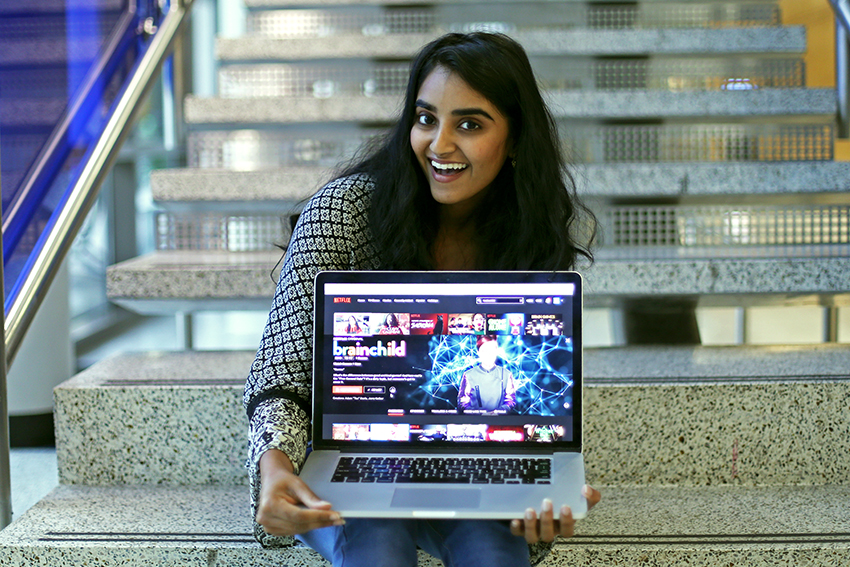 Following the blueprint of predecessors such as “Brain Games,” “Brainchild” provides an interactive learning experience for children. The show, executively produced by Pharrell Williams, tackles topics ranging from the psychological woes of social media to the wonders of the cosmos. As the host, Srinivasan guides viewers through animated infographics, games and experiments.

Srinivasan recounts pursuing “Brainchild” with no expectations of the show’s success. Srinivasan received word of an untitled science show from her L.A. agent last fall. Foregoing the usual, professionally taped audition, Srinivasan delivered scripted lines and improvised comedy bits against the backdrop of her college bedroom.

“I wasn’t thinking, ‘I’m gonna be the star of this Netflix show,’” Srinivasan said. “It was more like, ‘I have to give my hundred percent effort to make sure this is good.’”

Srinivasan’s bedroom production landed her a callback for auditions in New York.

“It’s like Murphy’s Law,” Srinivasan said. “When you expect something to be a certain way, it doesn’t turn out that way, so I didn’t have very high expectations when I was auditioning. I just really liked the content, and I thought I had a good interpretation of it.”

By December, Srinivasan landed the role and was filming in chilly New York streets and studios. Srinivasan said the possibility of inspiring children kept her on her toes through a packed filming schedule. Additionally, Srinivasan said she hopes fronting “Brainchild’s” science, technology, engineering, arts and math (STEAM) curriculum as an Indian woman draws children of diverse backgrounds into scientific fields of study.

“(Combining science with the arts) is a good way to get the message out, especially to inspire young women and people of color to go into science fields and even acting, too,” Srinivasan said.

While Srinivasan’s hosting seems effortless, her journey to the small screen was not free of hard work or sacrifice.

Additionally, the radio-television-film student sacrificed a semester’s worth of classes and spent months away from loved ones to pursue “Brainchild.”

Srinivasan’s childhood friend Divya Chakkaram said the distance was difficult, but watching Srinivasan’s hard work, personality and name be translated into a Netflix show was a surreal experience.

“She’s just really determined, focused and passionate,” Chakkaram said. “She’s extremely driven, and if she has a dream she wants (to pursue), she will go out of her way to make it as true as possible. That’s been true since we were little girls.”

Srinivasan said although “Brainchild” may have been a year in the making, the journey to her Netflix debut was 15 years in the making.

“It does take a lot of patience and hard work, but you know, hard work does pay off,” Srinivasan said.