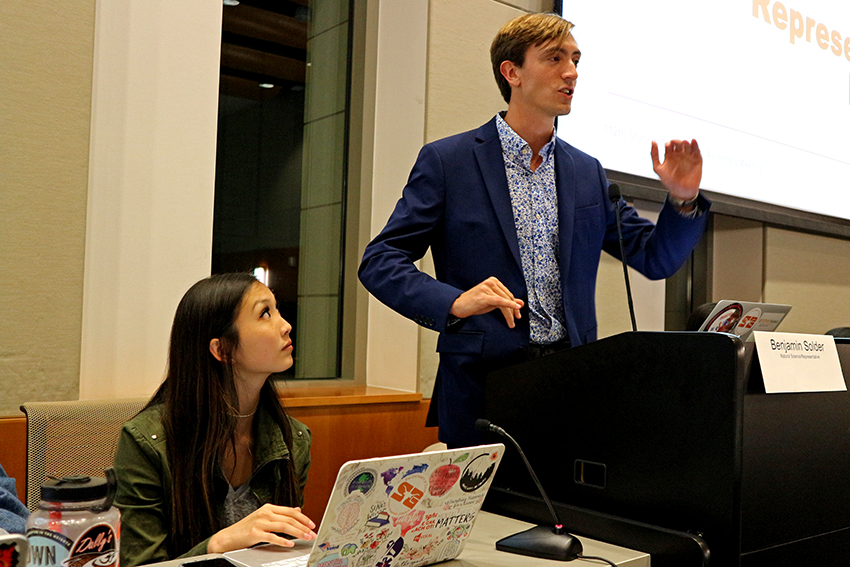 After two personal moratoriums, an invalid election and a runoff election last spring, Student Government is proposing changes to its election code to help the next election cycle run more smoothly.

Changes include a new single transferable voting system, the removal of all current Election Supervisory Board precedents and clarifications on what counts as candidate speech on social media.

“The landscape of the University and elections is constantly changing,” said Sarah Mockler, SG chief of staff and business honors and accounting senior. “As we have changes in our lifestyles and the mediums we use to campaign, it’s important to make sure the election code is still applying in a way that is fair.”

Under the new single transferable voting system, each student’s single vote will initially go to their first-choice candidate. As candidates with fewer votes are eliminated, votes will redistribute to second- or third-choice candidates on the ballot.

“There will be no runoff elections,” said Benjamin Solder, speaker of the assembly and neuroscience senior. “You will be ranking the ballot.”

There have been 10 runoff executive alliance elections since 1998, according to election records.

Last spring, Guneez Ibrahim and Hannah McMorris, former student body president and vice president candidates, received a moratorium, banning them from campaigning for most of the last day of voting. The Election Supervisory Board issued sanctions based on a like of a tweet with “discriminatory language” by the official Guneez-Hannah campaign account and a video that the campaign posted that the ESB said did not align with the rest of their campaign activities.

The sanction was reversed by the SG Supreme Court three days later, and the results of the first executive alliance election were nullified, leading to a second election and then a runoff election. On the final day of campaigning, personal moratoriums were issued against now-student body president Colton Becker and Ibrahim.

Becker’s sanction was issued for a love reaction to a Facebook post that accused the Guneez-Hannah campaign of being complicit in anti-Semitic rhetoric. Ibrahim’s was issued after she retweeted endorsements for her campaign during spring break, when candidates were prohibited from campaigning.

“(The rule is) trying to make sure that the person still has freedom of speech, but if you’re going to go on your campaign platform and campaign when you’re not supposed to, you’ll get penalized,” Slagle said.

Usually, the ESB must base rulings on their interpretation of the election code and the precedent set by the previous three years of ESB rulings. These changes propose eliminating all current ESB precedents.

“We want to remove that because ESB was basically changing its mind each year,” Solder said.

In order to be enacted, the proposed changes must pass through the SG assembly before being approved by a committee of the five campus entities that participate in campus-wide elections, and then the Dean of Students Soncia Reagins-Lilly, legal affairs and finally UT President Gregory Fenves.