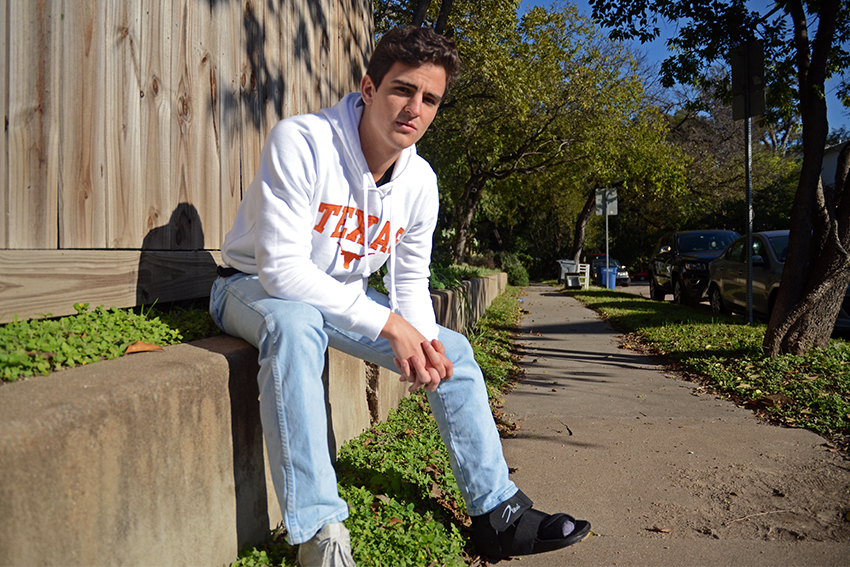 Sam Landingham remembers the Monday afternoon when he rode home from a friend’s house on a Lime scooter. Cruising at 15 miles per hour without a helmet past the San Antonio parking garage, Landingham said he didn’t see the car pulling out of the garage until he was airborne rolling onto the hood.

“All I could think about was being in shock that this actually happened,” history sophomore Landingham said. “My second thought was, ‘Oh my god, my foot hurts like it’s never hurt before.’”

X-rays at St. David’s Medical Center revealed Landingham broke his foot in the crash. According to a report released by University Health Services, scooter accidents that result in an injured rider occur almost daily.

Dockless scooters first arrived in Austin this spring before being temporarily banned by the Austin City Council and then brought back under greater regulation. But recently, as scooters face scrutiny over safety issues, companies like Bird and Lime have revamped safety efforts for riders.

“Because of the perceived increase in motorized scooter accidents, University Health Services began tracking injuries that were associated with this type of scooter in September of this fall semester,” said Sherry Bell, UHS’ consumer education coordinator.

In a presentation published on Oct. 11 by the Austin City Council Mobility Committee, between May 7 and Sept. 28, there were 37 motorized dockless scooter crashes. This data was collected by emergency medical services, which is different from how UHS collected their data and how the city tracks other accidents. The city tracks car crashes and bike wrecks using the Crash Record Information System. Scooter accidents are not currently tracked by this system.

In the 37 scooter incidents where EMS was dispatched, 31 required an involved party to be transported to the ER. However, the city data leaves out less serious injuries where EMS was not dispatched and the individual went to a hospital or medical clinic on their own.

“It’s probably a dramatic underreporting of the number (of injuries) that actually happened,” said Christopher Ziebell, medical director of the emergency department at Dell Seton Medical Center. “As we start looking at total injuries, it’s definitely an underestimate. I think if we’re looking at the number of people in the (intensive care unit), that’s probably pretty good data.”

St. David’s HealthCare, another major Central Texas hospital network, does not have data on scooter related injuries are treated because their ERs do not track how injuries occur.

A spokesperson for Bird said in a statement it currently partners with UT to ensure rider safety. The company restricts the maximum speed of scooters to 15 mph, requires riders to upload a driver’s license, provides an in-app tutorial on how to ride a Bird and how to park it and posts safety instructions on each Bird.

Lime, which reached 1 million rides in Austin this July, recently launched its “Respect the Ride” campaign to encourage rider safety and plans to distribute free helmets to the first 25,000 users who sign their safety pledge. A spokesperson for Lime said in an email the company also caps scooter speed at 15 mph and requires riders to watch safety videos before unlocking their first scooter.

University spokesperson J.B. Bird said in an email that UT has worked to promote and enforce traffic and parking guidelines for scooters. Bird said a group of representatives from various UT departments, including Parking and Transportation Services and UHS, was recently formed to create possible solutions to stop the uptick in scooter injuries.

“Currently, we are collecting all applicable data (like the UHS report) to help us accurately assess the situation and ultimately address both pedestrian and scooter safety,” Bird said.

Ziebell said scooter manufacturers should create a formal training program and raise awareness about the potential injuries of riding scooters incorrectly or without a helmet.

“The community at large hasn’t had a chance to swallow this pill properly in how to incorporate this as a means of transportation,” Ziebell said. “If you look at what the manufacturer puts out, they recommend helmets … but I don’t see anyone carrying helmets around in case they get on one.”

Landingham said anytime someone asks about the accident, the first thing he explains is how fortunate he was to only break his foot.

“Had I been like a split-second earlier the car would have been clipping me at my knee level, like T-boning me on the scooter,” Landingham said. “That could have injured me a lot worse or killed me if I hit my head the wrong way … I consider myself very lucky.”