‘I just thought I was broken’: How UT student copes with bipolar diagnosis 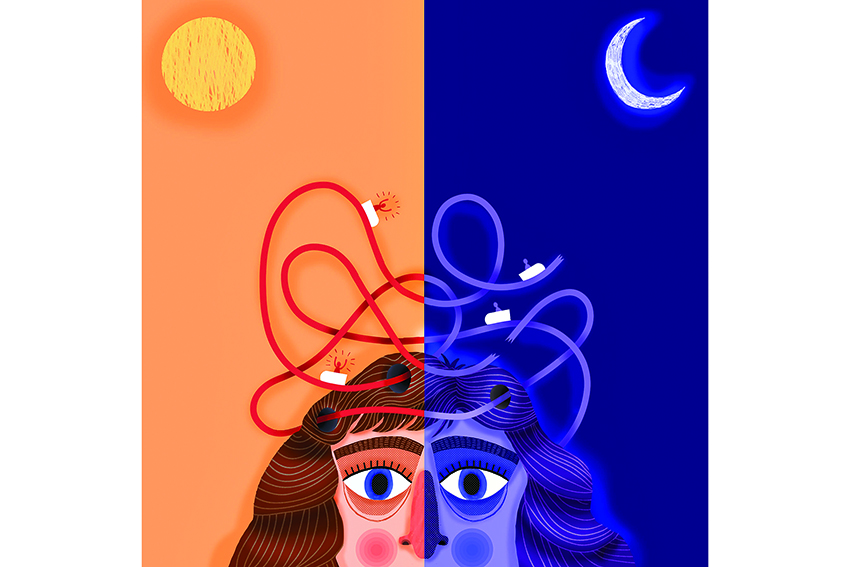 For Andrea Garza, being diagnosed with bipolar II disorder her first year at UT was a blessing in disguise.

“I just thought I was broken. I just thought there was something wrong,” said Garza, an advertising junior. “It was just so relieving to finally feel like … my life doesn’t have to be like this forever’… I can be, quote unquote, normal.”

Bipolar disorder is a chronic mental illness characterized by extreme highs and lows in mood behavior known as episodes of mania or depression, according to the National Institute of Mental Health. These periods can last weeks, months or even years at a time.

The institute reports that 2.8 percent of the U.S. population age 18 and older experiences bipolar disorder. Symptoms normally become prevalent between the ages of 15 and 24, often when students are in high school or college, said Julie Fast, a world leading mental health expert and the author of several bipolar books.

“It makes sense that if your average bipolar starts in mid to late teens that we would have our first really big episode at college,” Fast said.

To be diagnosed bipolar, one has to experience at least one episode of mania or hypomania, the less severe version of mania, in addition to depressive episodes. Bipolar I and II are distinguished by the severity of their respective “up” episodes, mania and hypomania, according to Jorge Almeida, director of the UT Health Austin Bipolar Disorder Center.

Manic episodes of extremely elevated moods result in frantic activity, grandiose thoughts of self, impulsivity, lack of sleep, talking very quickly and high risk-taking behavior, such as spending a lot of money and having reckless sex, according to the National Institute on Mental Health.

“It has gotten me in trouble before,” Garza said. “I’ve definitely purchased tickets to Paris before without having the money for it, but my depressive episodes are definitely a lot worse.”

Depressive episodes of bipolar are marked by extreme sadness, low energy, feelings of worthlessness, difficulty concentrating and even suicidal thoughts. With her depressive episodes, Garza said she has struggled to attend classes and study.

“Every task is an impossible task,” Garza said. “Getting out of bed is just the worst …. I can’t even process the thought of showering or eating.”

Before her diagnosis, Garza had shown symptoms of bipolar her entire life. Born in Brownsville, Texas, Garza grew up in the Rio Grande Valley and had her first manic episode in elementary school. Her episodes got worse and more frequent as the years went on.

“In high school, I self medicated with alcohol,” Garza said. “I would actually bring a glass water bottle to school filled with vodka. I used to be drunk 100 percent of the time from freshman year of high school to junior year. It was really bad.”

Still, Garza graduated ninth in her class thanks to the productivity of her hypomanic episodes and finally sought professional treatment in the fall of her freshman year at UT.

The exact cause of bipolar is unknown, but genetics and environmental factors, such as substance abuse, stress and lack of sleep — all well-known to college freshmen — can contribute to disease onset, Fast said.

“College is extremely stimulated and filled with drugs and alcohol,” Fast said. “You sort of got a chicken and an egg. So no, college does not create bipolar disorder, it just happens to be an environment where at the right age, plus some triggers, it is very common to have a first episode.”

If left untreated, bipolar mood swings can be so intense that day-to-day life becomes nearly impossible to maintain, said Fast, who was diagnosed with rapid cycling bipolar II at the age of 31 after living for more than a decade without treatment.

“I know this is boring for college (students), oh my god, but signing up for disability services and sticking to a regimented sleep program is the biggest two secrets. No question,” Fast said.

To assist students diagnosed with bipolar disorder at UT, the Counseling and Mental Health Center offers both individual and group therapy for bipolar patients, as well as psychiatric services for medication-based needs, according to Katy Redd, associate director for prevention and outreach.

Garza first visited the CMHC her freshman year for therapy but was then referred to a CMHC psychiatrist who diagnosed her with bipolar disorder.

“The main takeaway is give us a call, and we’ll help you figure out which of our services are a good fit for you,” Redd said. “You don’t have to call and know what you need. Just call.”

Services for Students with Disabilities also offers testing and attendance accommodations to students with psychiatric disabilities, including bipolar.

The UT Bipolar Center specializes in treating unstable individuals ages 16–35 with bipolar disorder, but college-aged patients will be referred to the center from CMHC depending on the severity of their symptoms, Almeida said.

In the midst of making new friends and adjusting to college life, being diagnosed with a lifelong mental illness is far from easy for the college-age bipolar population.

“My first year was very hard,” Garza said. “There was a whole month and a half that I didn’t go to classes at all. I would get my work done, but I just didn’t attend classes.”

Garza was on an antipsychotic for two years until she decided this August to switch to another drug with significantly less side effects. After two weeks of extreme withdrawal symptoms and new side effects, Garza stopped medication and therapy completely. After two weeks, a manic episode hit.

“I happened to be in Houston with a bunch of my friends when the manic hit, so I was like ‘F–k yeah!’ … You feel like nothing bad could happen to you,” Garza said. “Everything was all fun and dandy in manic world, until it fell immediately.”

Garza said she then crashed into a depression rather than hitting a stable neutral, which is common after abruptly stopping medication.

Bipolar has one of the highest suicide rates of any psychiatric disorder, with as many as 15 percent of those with the disorder who die by suicide, according to National Institute of Mental Health data. Garza said medication is the reason she survived her last suicide attempt in February.

“I’m positive that if I wasn’t on medication, I would be dead right now,” Garza said. “Medication saved my life. It helps in a way that is incredible but also puts you at a certain flat level.”

Garza now limits her drinking to one night a week in the presence of friends. She has since returned to her therapist and plans to restart start medication soon.

Through her struggles, Garza believes people with bipolar should continue to be accepting and open with others.

“Don’t push people away, and don’t be ashamed,” Garza said. “It’s not your fault.”