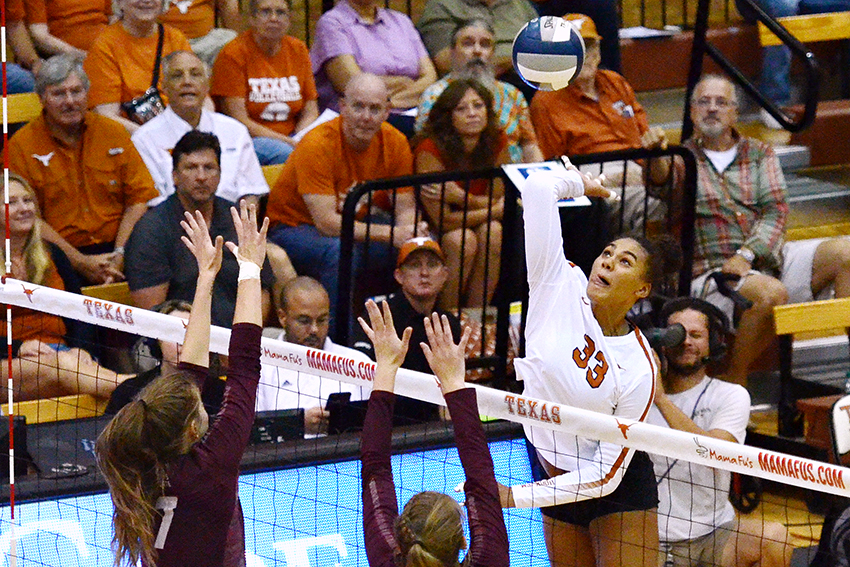 Things seem to roll flawlessly through a dress rehearsal. But it often doesn’t work out perfectly when it’s showtime.

That’s the situation Texas, the fifth-overall seed in the NCAA Tournament, is in after tearing through its conference schedule with a 15–1 record. Now, right at the start of volleyball’s biggest stage, the Longhorns find themselves just short of their season goal after a near-perfect dress rehearsal.

With the fifth-overall seed in the tournament, the Longhorns were just a spot shy of hosting their region of the tournament leading up to the Final Four. Instead, they’ll host the first two rounds with Texas having just faced one of the other three teams coming to Austin.

“I told them (my players) that if they don’t have nerves then there’s something wrong,” head coach Jerritt Elliott said. “If they’re not having butterflies going into this then I’m concerned … it’s part of being an athlete. They all have nerves, you want them to have nerves.”

Texas has four freshmen who are a part of Elliott’s heavy rotation. Despite the youth in this year’s team, the squad has been able to hit its stride and patch up its rough spot. And the Longhorns’ newcomers aren’t completely new to a big stage.

Outside hitter Logan Eggleston played for three state championships as a high schooler, coming to Texas following the conclusion of her junior year. Libero Sydney Petersen and setter Jhenna Gabriel both have experience as All-Americans and All-State players.

The list can go on and on, but all that matters is whether Texas can take care of business when push comes to shove against Stephen F. Austin and any other game after that. With the talent and overall advantage, Elliott says his toughest challenge is keeping his players from looking past opponents.

“The biggest mistake people make as coaches is that you think you have to be perfect in the NCAA Tournament.” Elliott said. “You just have to find a way to win that night.”

Stephen F. Austin comes in with a 32–2 record, having won 29 straight games with its last loss coming nearly three months ago. Along with this impressive record comes the fact that this will be the first time Texas will be facing SFA in over 12 years.

Apart from Texas’ strong record and statistics, the team’s morale for the tournament opener trumps almost anything that’s happened before this point in the season. And there’s no question that the Longhorns are using motivation from both internal and external factors to top last year’s finish.

Two months ago, Texas’ loss to Stanford, the nation’s top-ranked squad, exposed the Longhorns’ issues in serving and blocking, forcing them to address their glaring issues. Now, 16 games later, Texas is peaking at just the right time but still recognizes the need
to improve.

The Longhorns have already achieved one of their goals this season: winning the conference. Starting Thursday, Texas will go after its second and penultimate goal — a national title.

“We break it up into three seasons” Elliott said. “(We have the preseason and Big 12 play) and now it’s the NCAA Tournament. Players come here to be a part of it and get ready to go
to battle.”

The first round of the NCAA Tournament kicks off Thursday at Gregory Gym. Rice will face Texas State at 4 p.m. before the Longhorns play host to Stephen F. Austin at 7 p.m. The winners of both games will face off on Friday, Nov. 30, at 8 p.m.