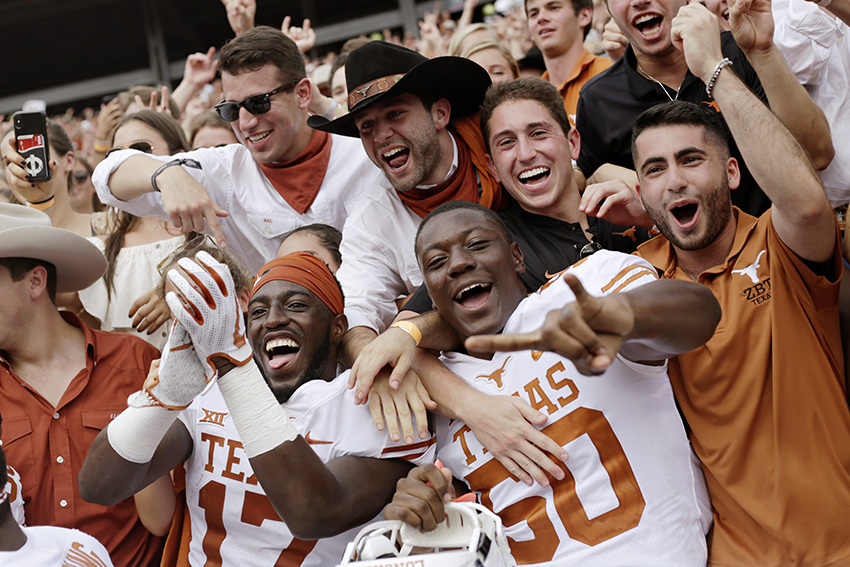 At this time two years ago, Texas’ season was over.

The Longhorns didn’t have a Big 12 Championship to prepare for with a New Year’s Six Bowl on the line — a bowl game wasn’t even on the table.

“I was just getting ready to wrap up school and head back home,” defensive back P.J. Locke III said. “I didn’t know how to feel. I was fresh out of high school. I didn’t know what it felt like to play in a bowl game or to be playing before Christmas, in December at least. I watched other teams play, discouraged knowing that could be us.”

As head coach Tom Herman arrived on campus in 2016 to start a new era, Oklahoma’s dominance was just beginning on the northern side of the Red River.

The Sooners secured conference titles in 2015, 2016 and 2017. Now Texas is the only team standing between Oklahoma’s fourth straight conference championship and a probable shot at the College Football Playoff.

While Texas and Oklahoma will meet twice in the same season for the first time since 1903, this go-around will hardly resemble the Red River classic that unfolded earlier this year.

The rivalry is relocating roughly 21 miles west of the Cotton Bowl to the home of the Dallas Cowboys at AT&T Stadium. And while the excitement surrounding the Red River rematch continues to grow, Texas must handle the emotions from both the Red River Rivalry and the Big 12 Championship.

“I did tell our guys, this is not the Red River Showdown, this is not October,” Herman said. “That game was played in the Cotton Bowl, and that’s played for the Golden Hat, and that one is over.”

The emotions surrounding the rivalry have only intensified after senior defensive end Breckyn Hager said Oklahoma “has no defense” followed by, “And what time is it? It’s 11:12 … and OU still sucks,” after Texas’ 24-10 win over Iowa State.

Hager was later reprimanded by the Big 12 and forced to apologize. But that just sparked a slew of comments from both sides, including a response from Oklahoma linebacker Curtis Bolton following the 59-56 win over then-No. 13 West Virginia.

“It blows my mind,” Bolton said. “We hung 50 on them, too. If anyone on their defense has anything to say, they can have fun playing Kyler next week.”

As for the officiating, the Big 12 has confirmed the ‘Horns Down’ gesture will earn an unsportsmanlike conduct penalty. On the other side, Texas defensive end Charles Omenihu aimed a specific celebration toward Kyler Murray, who was selected by the Oakland Athletics in the 2018 MLB Draft, during the first matchup in October. Omenihu picked up an imaginary bat and swung for the fences after a big defensive play. And he’s planning on bringing it out again this Saturday.

“My coaches saw me swing my imaginary bat. I told y’all when I swung it was 450 feet,” Omenihu said. “I’m gonna try and hit Jerry’s big TV up there.”

Trash talking and celebrations aside, the Sooners and Longhorns have created the biggest matchup in this rivalry since the 2008 matchup between No. 1 Oklahoma and No. 5 Texas.

Now,  two programs who were in completely different classes just two years ago will go head-to-head, and it’ll be for much more than a Golden Hat.

“It’s his best game against ours, and it’s for the championship,” Locke said. “You’ve got a Heisman candidate at quarterback, you’ve got a team fighting to get into the playoff, we wouldn’t want it any other way. We’ll definitely have our hands full, but this is something we’ve worked for since my freshman year.”