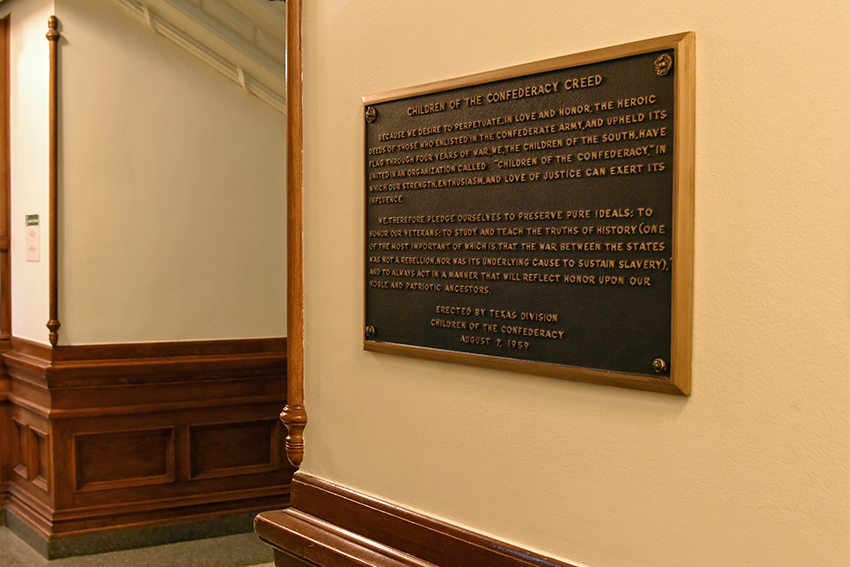 It’s up to the Texas Legislature, Preservation Board or Historical Commission to remove a plaque inside the Capitol honoring the Confederacy, Attorney General Ken Paxton said in a legal opinion published last month.

For months, state officials have argued over the proper procedure for removing the plaque, which says the Civil War was “not a rebellion, nor was its underlying cause to sustain slavery.” The debate is one of many in Texas and across the country to determine how to handle Confederate monuments displayed in public spaces.

“It not only conveys a falsehood and Lost Cause propaganda, but also whitewashes the origins of the Confederacy, allowing for sympathetic and valorized interpretations of a war over white supremacy and the subordination of people because of their race,” Reddick said in an email.

It’s no coincidence the plaque was installed in 1959 during the early years of the Civil Rights Movement, Reddick said.

“It goes back to an incomplete and insincere interpretation of history,” Reddick said. “I spent a lot of my youth in Texas and in the South, and the Confederacy is normalized through the naming of schools, towns, statues and parks — I went to two high schools named after Confederate leaders.”

Although several lawmakers have condemned the plaque, action has been delayed on both political and procedural fronts, said Joshua Blank, manager of polling and research at UT’s Texas Politics Project.

“Beyond questions of who has the authority to make a decision to remove a plaque from Capitol grounds, the political issue of removing Confederate monuments — even inaccurate ones — is clearly divided along partisan lines,” Blank said.

For this reason, Blank said Republican officials — including Gov. Greg Abbott, who chairs the State Preservation Board ­— are hesitant to remove the plaque unilaterally.

“Republican office holders know this issue is somewhat complicated, and based on attitudes of their electorate, they don’t necessarily want to be too far out in front of something they can be criticized for,” Blank said.

In the Sept. 28 gubernatorial debate, Abbott said the legislature, not the preservation board, is responsible for taking the plaque down.

Reddick said the plaque should be immediately removed from Capitol grounds, then transferred to a museum, where it can serve an educational purpose.

“Symbols of white supremacy have no place in the Capitol, which represents all Texans,” Reddick said. “Neo-Confederate symbolism needs to be contextualized, and … museums, with the appropriate educational and historical placement, are the best place for objects such as the plaque.”